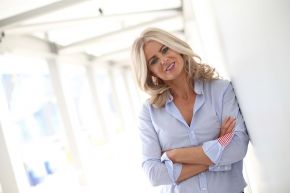 Ulster University vision scientists have taken an important first step towards the world's first cure for hereditary blindness, pioneering a personalised medicine that targets and repairs genetic damage in part of the eye.

The scientists have discovered a treatment that can repair damage caused by cloudy deposits in the cornea. The cornea is the outer clear part of the eye that allows light to pass through to the back of the eye and the condition, called corneal dystrophy, worsens with age, eventually leading to blindness.

Using a novel DNA editing technology called CRISPR, Ulster University's vision science experts have designed a method of targeting the specific DNA or gene in the eye that is responsible for the cloudy deposits. The highly advanced treatment has been developed by treating mice with the same eye disease and the University team is now progressing towards human trials.

The treatment involves injecting a medicine into the front of the eye which precisely targets the disease-causing gene and switches it off but which doesn't harm other healthy tissue. It reverses the damage caused by the eye disease and restores clear vision in the patient.

The discovery was presented to the international scientific community in Birmingham this week. Ulster University's Professor Tara Moore explains: "Each cell in our body contains two copies of a gene, one from each parent. In hereditary conditions like corneal dystrophy, the faulty gene dominates.

"Ulster University is one of the UK's leading personalised or precision medicine research centres.  One core area of this work involves developing treatments that target faulty genes and switch them off or remove them. In the case of corneal dystrophy, that means switching off the faulty gene or DNA to allow the healthy gene to work properly and prevent blindness".

Professor Moore added: "Corneal disease patients frequently refer to the frustration and anger caused by the condition which not only robs them of their sight, but potentially their children and grandchildren too.The only generic treatment currently available to those blinded by the disease is corneal transplantation using a donor organ eye and this comes with risks and variable success rates.

"My research team at Ulster University has been working towards this discovery of a new, minimally invasive, injectable treatment for the past year. Human trials will follow but research to date is more than positive, in fact within 48 hours of treatment, the effects are already apparent. It is a truly ground breaking advance for the global vision science sector, and more importantly it provides hope for patients around the world."

Human trials will follow and the objective is for an ophthalmologist to be able to treat a corneal dystrophy patient with a single injection and prevent vision loss. This a permanent fix for one type of hereditary sight loss but the discovery also has the potential to be applied to target other eye conditions and other genetic diseases affecting different parts of the body.