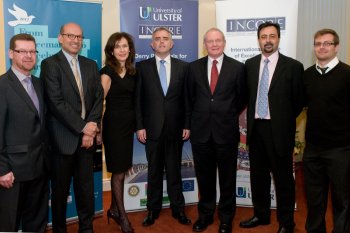 The President of Colombia Juan Manuel Santos will study very closely the 'Derry Proposals for Colombian Peace’, the country's Ambassador to the UKtold an invited audience at the University of Ulster's Magee campus at the weekend.

An end to hostilities, victims’ rights, political participation, land reform and drug-trafficking in Colombia were among the topics for discussion at the three day event hosted by INCORE, the Ulster's International Conflict Research Institute at Magee and Rotary Club of Londonderry.

gates from Colombia and the United States joined experts, policy makers and researchers from Northern Ireland and the UK to examine how lessons learned from 15 years of post-agreement politics in Northern Ireland could contribute to the Colombian peace efforts.

Colombian peace talks began last October in Oslo, Norway and have continued in Havana, Cuba with Cuba and Norway acting as guarantors in the latest effort to end Colombia’s half-century old insurgency.

The weekend programme included various sessions, open discussions and debates, and concluded with the formulation of ‘The Derry Proposals for Colombian Peace’ which will be presented to Colombian representatives at next month’s international peace conference in the city organised by INCORE and Rotary.

The event opened on Friday with a reception and dinner attended by the Colombian Ambassador to the UK, Mauricio Rodriguez,Martin McGuinness, deputy First Minister of Northern Ireland and Junior MinisterJonathan Bell.Gerard Finnegan represented the local Rotary Club.

Professor Brandon Hamber, INCORE Director explained that the event was structured around the five key themes that formed part of the Colombian negotiation agenda.

“While every peace process always requires tailor-made and innovative negotiation formats, as well as implementation strategies, there are different levels of comparability with Northern Ireland,” said Professor Hamber.

Colombian Ambassador, Mauricio Rodriguez said his country's peace process was full of obstacles with extremists on both sides trying to abort the process but it was important to remember that the vast majority of Colombians are in favour of peace.

He said the conflict had claimed many thousands of lives and wasted billions of dollars and he hoped the weekend deliberations would led to enlightened recommendations that would help the peace process in Colombia.

Martin McGuinness said that as Sinn Fein chief negotiator during the format of the 1998 Agreement in Northern Ireland, he felt privileged to be involved in one of the most successful peace processes in the world but cautioned that there was still a considerable way to go.

Citing examples of other peace process around the world, he said that for any peace process to be successful, it had to be inclusive. He appealed to all parties involved in the Colombian peace process not to ignore the ordinary people ‘who have been affected by a conflict that is way above their heads’.

The Derry Proposals for Colombian Peace event was supported and funded by the Rotary Club (Derry/Londonderry) and the “Sustainable Peace Building Programme” (SPBUILD) of the Seventh Framework Programme (Marie Curie Actions, European Commission).

Event organiser was Ariel Sanchez Meertens, a native of Colombia who is currently working at INCORE on a Marie Curie Research Fellowship for Sustainable Peace Building.

He said: “Political will and momentum are of the essence. We should not wait and see what comes out of the dialogues in Cuba. We must strive for a more active commitment, which is why we set up this initiative.”

Speaking on behalf Rotary, Mr Finnegan said he hoped the weekend discussions would help transform the vision for sustainable peace in Colombia into a reality.

"The theme of the international peace conference in the city at the end of May is ‘From Peacemaking to Peace building – Journeys towards Reconciliation’. We need to go beyond peacemaking to achieve sustainable peace. It’s an ambitious goal but with political will, can be achieved.”