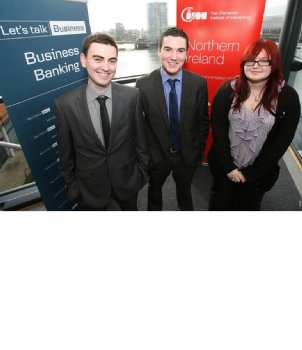 University of Ulster BSc Advertising students at Magee have won an industry award after battling 11 other teams in a ‘real life’ marketing pitch competition.

Members of the winning team, Kayos, were named ‘The Pitch NI 2012 Champions’ at an event organised by the Chartered Institute of Marketing Ireland, in association with Northern Bank, at W5 in Belfast last week.

The Kayos pitch consisted of a marketing strategy aimed at young people, which incorporated social media, a financial incentive and a viral video which has been viewed over 1000 times in just five days.

Eleven teams of three pitched their ideas based on a marketing brief given by Northern Bank two weeks earlier. The pitches were judged by a panel of industry experts and narrowed down. The final three teams presented their pitches again in front of an audience and answered questions from the panel.

“We are confident that this programme prepares students for the demanding world of advertising and marketing.”

CIM Ireland Board Member and judge Charles Fulton said: “The inaugural ‘The Pitch’ competition in Northern Ireland has proved a huge success. It gives CIM Ireland great confidence in the skills of local marketing talent by seeing how well they responded to the brief.”

Northern Bank’s Marketing Manager Michael McLaughlin added: “The standard of competition was higher than we could have ever imagined and the creativity and professionalism were inspiring. Throughout the event the audience were tweeting their views much like during live TV programmes, which added a real air of excitement to the day.”