A University of Ulster student is taking part in an international computer games competition which could lead to a BAFTA nomination. 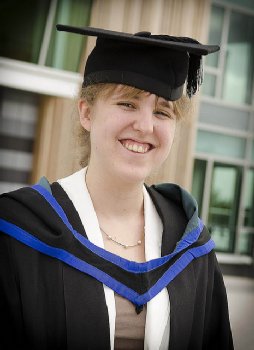 A University of Ulster student is taking part in an international computer games competition which could lead to a BAFTA nomination.

Louise McConnell was one of just 75 talented students from around the world, chosen to compete in the ‘Dare to be Digital’ program currently being held in Dundee.

She graduates at the Coleraine campus today with a BA Hons in Interactive Media Arts.

“We will spend nine weeks developing a prototype of a game, while receiving help from industry mentors. It is a fantastic opportunity for students - one of the prizes is a BAFTA nomination for the top three games and the competition also gives game companies a chance to see emerging talent,” she said.

Teams of five students, usually a mix of artists, programmers and audio, assemble at Abertay University during June to August to develop a prototype video game.

Louise, who grew up in America but now lives in Coleraine, will be part of the Irish team.

“I am one of two artists in my team. We will be designing the characters and game environment, as well as creating cut scene animations, recording the music and possibly even the sound effects within the game,” she said.

“I'm working with a team of guys from the Institute of Technology Carlow. Together we are known as ‘The Weather Factory’. The game itself is a puzzle ‘platformer’ designed for the iPad. It is about a Victorian gentleman who has crash landed his air balloon into a volcano and found himself inside a Weather Factory - that is a factory that makes the weather.

“The players play as the balloonist as they solve puzzles to try to escape ‘The Weather Factory’. The cool thing about our game is that the plan is to create context sensitive puzzles, for example, using GPS and weather apps on the iPad. So if it is raining in the town that the player is in, the game will respond differently than if it were sunny. It means that the player gets a different experience every time they play the game.”

University of Ulster Interactive Media lecturer, Alan Hook, added: “Being picked to be part of this program is a very important development for the student personally, the course, school, but also the inter-institutional relations as Louise has teamed up with students from the Institute of Technology Carlow and to my knowledge is the only Northern Ireland participant.”

At the end of the competition, the game prototypes are displayed at talent showcasing event Dare ProtoPlay. The general public and industry experts get to play and vote for the games and the top three winning teams a cash prize at the Dare awards ceremony.

Seven months later the winning teams attend the BAFTA Video Games Awards to compete for the coveted ‘Ones to Watch Award’.

The Dare to be Digital competition was established by partners; Scottish enterprise Tayside, Dundee City Council and University of Abertay Dundee in 2000.