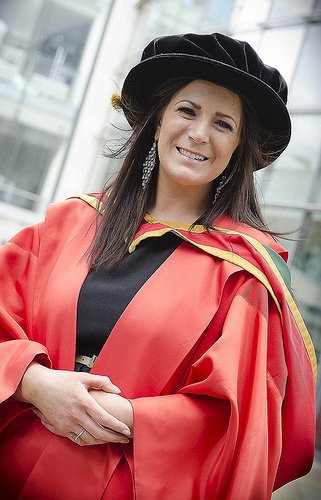 How smokers make sense of their habit to themselves and others was revealed during a University of Ulster student’s PhD research.

Grace Burke from Claudy, who graduates today, looked at smoking as a social phenomenon that has a complex relationship with ‘who we are’ and not just ‘what we do’.

Unusually she based her research on recordings of smokers’ casual, spontaneous conversations rather than interviewing subjects directly.

Grace, who was based at the School of Communication at the Jordanstown campus, found that the way that people make sense of their behaviour is more complex than traditional survey type research can reveal.

“I recorded people making statements such as ‘I don’t smoke!’ at the same time as smoking a cigarette and discussing when and how much they smoked.

compulsion, sheds some light on the observation that nicotine addiction is not the main problem in giving up smoking. “

Commenting on the PhD research, Linguistics lecturer, Catrin Rhys said: “Grace’s work contributes to a sociology of smoking that helps us to understand more fully why the promotion of smoking cessation is such a complex and challenging task.”