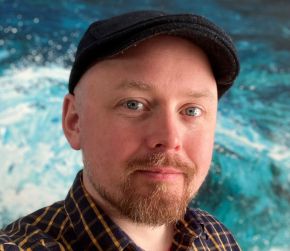 John’s PhD focused on the representation of mental health struggles and suicidal ideation in filmmaking, looking for more constructive ways to portray these important issues.

Mental health is a subject close to John’s heart,

“I have always been interested in tackling issues of mental health and suicidality in my creative practice, ranging from painting to photography, song writing to filmmaking, as I have been personally affected by these issues in my life and believe it is important to address these issues as much as possible.

“My PhD project studied the ways in which filmmakers have typically represented issues of mental health and suicidality and found a history of unhelpful or stigmatising cinematic depictions, ranging from misinformed or lazy character stereotypes to potentially dangerous depictions of suicide, through a phenomenon of imitative suicide known as the Werther Effect. My PhD thesis sought to find ways in which we as filmmakers might use our creative tools more constructively by integrating the protective principles of the Papageno Effect, which proposes that modelling help-seeking and recovery from suicidal crises might have a protective effect, into our filmmaking practice.”

Derry man John completed both his Undergraduate and Master’s degrees at Ulster University so Magee was the natural choice to embark on his PhD journey,

“The success of my final Master’s film, DROP, led directly to applying for the Cinematic Arts PhD at Magee in order to further explore the ways in which we as Filmmakers might represent issues of mental distress and suicidality more constructively in our work.”

John’s PhD was practice-based, allowing him to integrate the latest multidisciplinary research into filmmaking practice into his final PhD film, JACK.

“It was crucial for me to be able to create the film, JACK to discover the reality of putting the theoretical principles of the Papageno Effect from the world of Psychology and Suicidology into filmmaking practice. By creating a film informed by multidisciplinary research, this project bridges the gap between often inaccessible academic literature and a wider general audience through film, encouraging help-seeking for anyone experiencing mental distress or suicidal ideation and promoting more open conversations about our mental wellbeing.”

A particular highlight during his PhD journey was the opportunity to present his work at the International Association of Suicide Prevention (IASP) World Congress in 2019,

“The IASP World Congress brought the world’s leading experts in suicide prevention to Derry, including Dr Thomas Niederkrotenthaler and Dr Benedikt Till, who originally proposed the Papageno Effect and played an important part in my research. It was a tremendous honour to present on the same stage as leading researchers from across the world in my home town.”

John is currently planning the early stages of his next film and continues to lecture in film and creative media at the Nerve Centre in Derry.