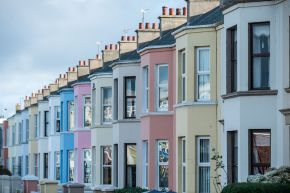 Ulster University’s latest Quarterly House Price Index report indicates a residential property market that had continued to remain stable in the first two months of the quarter, with transaction levels continuing in the upper end of the market until the impact of COVID-19.

Analysing the performance of the Northern Ireland housing market between January and March 2020, the report reveals an overall average house price of £175,803 which represents a weighted annual level of growth of 6.8% between Q1 2019 and Q1 2020. When considering quarterly movements, however, the Index indicates a nominal decline of 0.9% relative to the fourth quarter of 2019.

The price statistics are based upon market evidence from a somewhat reduced sample of 1,483 sale transactions over the first quarter of the year, down 22.8% from the same time last year (1,922). Undeniably, the COVID-19 pandemic has profoundly impacted on market activity levels particularly in the later part of the quarter, with transactional activity effectively on hold. The lockdown response to the pandemic has had a significant effect on the availability and collation of data for the survey which is borne out by the marked decline in transactional evidence relative to ‘normal’ Q1 activity levels.

Following a buoyant fourth quarter of 2019, agents were anticipating further price growth in the first quarter of the year. After the prolonged period of uncertainty following the vote to leave the EU, many agents felt that the phase of market suppression would end with the start of the new year and the advent of a more stable political situation both locally and nationally.

The initial few weeks of the first quarter indicated that these sentiments were correct, with agents reporting an escalation in general market activity through aspects such as an increase in the number of enquiries from both purchasers and vendors and new build developments selling out quickly. The ‘lockdown’ in mid-March curtailed this market momentum. The long-term implications of the pandemic are still unclear; however, the perception of many agents is that the market is ‘on hold’ until daily life regains a semblance of normality.

“The first quarter of 2020 looked set to bring a greater level of stability to the Northern Ireland housing market, with more political certainty and a more focused economic direction for the UK.  However, market uncertainty was to reappear in the form of the Coronavirus pandemic and the subsequent lockdown.”

“The re-opening of the housing market when it comes should bring with it a revival in terms the delayed transactions from March onwards and the built up enquiries from the lockdown period, however the longer term implications of the anticipated recession are less clear.  Unpredictability, it seems, is set to continue for the foreseeable future.”

Karly Greene, Head of Research with the Housing Executive, which commissions the research, said:

“The findings of this survey show that there was healthy demand within the local housing market in the early part of the year, but obviously the restrictions and huge changes in day-to-day life have greatly curtailed the level of activity since mid-March.

“We would very much hope that a measured easing of the current restrictions will allow Northern Ireland’s economy – including the housing market – to re-open and recover in a safe and sustainable way, but it will likely be some time before we have a true sense of what recent events mean for house prices and the residential property market.”

“The housing market at the beginning of 2020 started as it had ended in 2019, with increased transactions levels and sustainable price rises. However, COVID 19 has had a dramatic impact on the market towards the end of the quarter with viewings and valuations ceasing, influencing transaction levels which were down 22.84% overall.

“That said, prices remained robust with a negligible less than 1% fall when compared with Q4 2019 and 6.78% annual growth. Continued support through the Government’s employee retention scheme, into the Autumn, and other measures to support businesses will be important factors in maintaining transactions and sustainability as agents and valuers seek to reboot transactions in the market.”