First Class Honours for First Graduate in the family 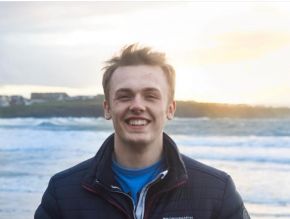 First in his family to go to university, Wallace Bruce graduates this summer with first class honours in Media Studies and Production and a diploma in International Studies with distinction from Ulster University. He also received the RTE prize for achieving the highest overall mark on his course.

Wallace grew up on a farm in a small rural community just outside Magherafelt. Unsure of which career path to follow, Wallace chose to study Media Studies and Production in Coleraine. He has always been creative, enjoying sketching from a young age, so the course was an opportunity to harness his creativity and explore a variety of disciplines and skills.

Through his course Wallace discovered a love and talent for photography,

“I had never held a camera before, but thanks to my course I was introduced to both photography theory and practice. It led me to buy my first camera in my second semester, which is when photography became more than just something I did for class.”

Forced to the sidelines of the rugby pitch due to injury Wallace began to take photographs at the matches and found his niche: sports photography.

“I remember the feeling of a professional photographer shooting a game I played in during school, and it was surreal to see a photograph he had taken of me in action. When I started to take pictures for myself, I realised I could give that special feeling to others. Since then, I’ve found sports photography to be a hugely rewarding niche for me to work in. I had the opportunity to rub shoulders with world class photographers at the British Open in Portrush last summer, which gave me an insight into the competitive professional industry.”

In his third year Wallace swapped Coleraine for Tulsa, Oklahoma as part of the Study USA programme which sends NI students to small American campuses for a year. In Tulsa he had the opportunity to study film photography, adding to his photography skillset but also experience another culture and community.

“I can’t begin to describe how worthwhile an experience my year abroad was. I now have friends for life on the other side of the planet, and a greater understanding of what it means to live in a globalised world. The highlight of my experience was reaping the benefits of investing in community and friendships, even though I knew I would return home in less than a year.”

The North Coast has become home for Wallace and he plans to stay in Portstewart for the foreseeable future working in the hospitality sector as he develops his portfolio and launches his freelance career.

“Living on the north coast means I am surrounded by likeminded creative professionals who can encourage me along this path. My dream is to be photographing along the side lines of a Rugby World Cup final someday – watch this space.”