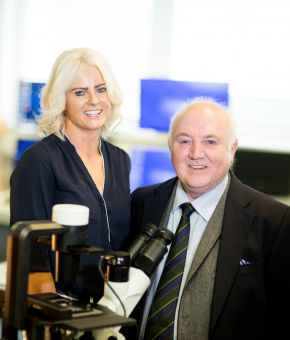 There are various types of skin cancer, most of which can be detected early with excellent cure rates.  In the UK and Ireland melanoma is rapidly becoming one of the most common skin cancers. In Ireland, almost 12,000 new cases of melanoma were diagnosed in 2016 making it the fifth most common cancer, while in the UK, rates have almost doubled since the 1990s, with around 44 melanoma cases now diagnosed daily.

A significant factor contributing to these statistics are the increased periods of intense sun exposure, or other UV light sources, whether through working in the sun, overseas holidays or the use of sunbeds.  The #LoveYourSkin campaign highlights the early signs of skin cancer and encourages individuals to check their skin regularly and if they notice an irregularity, get it checked out.

Melanoma is a form of skin cancer that arises from the cells that produce melanin, the pigment that gives your skin its colour, and it is easier treated at its earliest stages. However, if not detected early, it has the capacity to spread quickly to other parts of the body. When this occurs, the disease is profoundly more difficult to treat with five-year survival rates less than 15% and life expectancy often just a matter of months.

Explaining what people should be looking for Tara Moore, Professor of Personalised Medicine, Ulster University says:

“Our biggest advantage in the fight against melanoma is that this is one of the very few cancers that can be visually identified forming in its early stages. It is critical that we’re vigilant and aware of the danger signs.  Check your skin for suspicious moles on a regular basis and report anything unusual to your doctor. The first sign of a melanoma is often a change in the colour of a mole, though melanomas can also appear as a new growth rather than arising in a pre-existing mole. While checking your skin, remember the ABCDE rule.

“If you have any suspicious moles or lesions that fit these criteria, see your doctor immediately, or skin specialist. It could save your life.”"

“Raising public awareness of skin cancer is extremely important.  It is clear that we are living in a world that is experiencing climate change.  The recent fires in Australia are evidence of the fact that intense periods of sunshine are becoming more common.  It’s critical that everyone actively takes steps to reduce their exposure to harmful UV rays and regularly checks themselves for visible signs of skin cancer. An often overlooked source of UV exposure includes any source of generated UV light.

“Early identification is the key to successful treatment.  Treatment techniques which Professor Tara Moore, Dr Paul Thompson and Dr Patricia Rodriguez have been working immensely hard to enhance. I want to take this opportunity to thank the team for the progress that they have made looking at modifiable factors such as vitamin D, vitamin A and forms of prostaglandins as relatively non-toxic approaches for limiting the progression or relapse of primary melanoma beyond its early stages, and also their use as co-treatments applied for more advanced forms of the disease. This work will undoubtedly save lives.”

Listen to the melanoma danger signs

The David Cross Foundation for Reconciliation

The David Cross Foundation for Reconciliation was established in 2015 in memory of Terry’s son who tragically died at the age of 33 from malignant melanoma, an aggressive form of skin cancer. The Foundation supports the development of innovative approaches to diagnose and treat skin cancer. The programme of research led by Ulster University Professor Tara Moore, alongside her colleagues in Biomedical Sciences Research Institute, aims to help early diagnosis of skin cancer and develop a more personalised approach to treatment.

The Foundation has a twin focus. Firstly, funding skin cancer research and raising awareness of the importance of early detection and prevention. Secondly, the Foundation drives via reconciliation related investments for sustainable change across Northern Ireland.