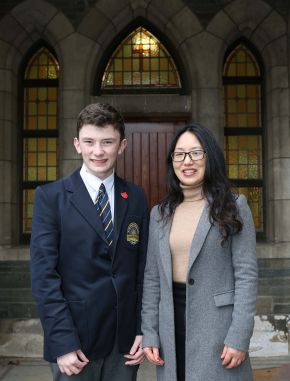 Leo Doherty, an Upper-Sixth pupil, has won first prize in the Intermediate Category of the British Council’s Mandarin Speaking Competition, which was held at the Victory Service Club in London, recently.

The competition aims to build interest in Chinese language and culture and saw Leo joined by students from 42 Secondary Schools from across the UK – including fellow pupils Anitta Sibin, who competed in the Beginners’ Category, and Matthew Rodgers, Niamh Fleming, Grace Martin, Vibhav Nthanankalva and Owen McFadden, who performed in the Group category.

The Lumen Christi pupils made it through to the final after competing in the Northern Ireland heat last November which was supported by the Confucius Institute at Ulster University.

Leo, who has only been learning Mandarin for two years, feels it’s surreal to have won.He said:

“I’ve always loved linguistics and with Mandarin, it changes the way you think about languages – it’s almost like a problem to be solved. I also like that you can watch different TV, listen to Chinese music and communicate with people across the world. I was shocked when I won. There were so many good competitors and I didn’t expect to come away with anything. I was just there for the experience, and it wasn’t really about the winning so to speak – it still feels very surreal. My teacher XU Honge helped me prepare - giving me lots of tips and tricks ahead of the competition as well as showing me how to manipulate the language. It was definitely a lot more work than I originally thought, but well worth it!”

Leo, who is in his final year at Lumen Christi, plans to study Maths at either Cambridge University or St Andrew’s.

“At university I plan to study Maths as it’s just something I enjoy and hopefully it will take me into some job I like. I aim to keep learning Mandarin as I think it will be useful – you see jobs in London, Dublin and even Derry where they need people that can speak Mandarin and communicate with people in China.”

The North West seems to lead the way for learning Mandarin, with Leo’s win following on from Eve Flood, a Thornhill College student, who took the Beginners’ title last year.

“We’re just so tremendously proud of Leo, as well as the rest of our finalists. It’s a great achievement for all of them – they were very professional and performed at such a high level, especially considering the competition they had to face.I must pay tribute to their Mandarin teachers from the Confucius Institute, who have worked so hard with them. As a school, we have been part of the Confucius project since 2014 and it’s created so many opportunities for our pupils, helping them learn more about Chinese language and culture.”

As the most spoken language in the world, Mandarin is recognised as a valuable skill for young people in the UK to acquire. 77 per cent of British business leaders surveyed in 2018 said that speaking Mandarin will give school leavers a career advantage. Research by the British Council has found that Mandarin is the second most important foreign language for the UK’s influence on the global stage.

“We would like to offer our congratulations to Leo Doherty from Lumen-Christi College on his achievement in this year’s UK wide British Council, Mandarin Speaking Competition alongside all other competitors and winners. Ulster University is proud to play its role in the development of Mandarin speaking skills for students in local schools through our Confucius Institute which was formed in 2011 to develop academic, cultural, economic and social ties between Northern Ireland and China.

It’s incredibly positive to see the programme go from strength to strength, as evidenced by the success of school pupils from across Northern Ireland, who have now won national awards in both 2019 and 2020.”

“Congratulations to Leo on such a fantastic achievement, which is testament to the hard work he and his teachers have put in throughout the past year. We hope that Leo is an inspiration to other students to think about learning Mandarin or finding out more about Chinese language and culture. Language learning is an essential part of understanding and collaborating with other countries and cultures. With more than one billion Mandarin speakers in the world, it’s important that more young people in the UK learn the language – those that do will find it opens up exciting study and work opportunities in our increasingly interconnected world. In the British Council we have a wide range of opportunities and resources available to support schools who are keen to get more involved in international work and would encourage other schools to get in touch with us to see how we can support their international ambitions.”