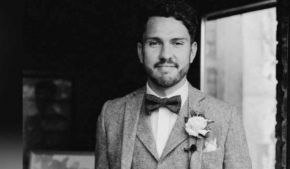 Originally from Portadown, Nathan who lives in Comber with his wife and young daughter Florrie, didn’t know what career he wanted to pursue after completing his A levels, so he took a break from education. During this time he developed an interest in computing and coding in particular. This prompted Nathan to start a foundation degree in Computer Science, where he obtained a work placement with Applied Systems.

After completing his foundation degree gained full-time employment with the company who supported him to complete his Computing Systems degree at Ulster University on a part-time basis.

Speaking about why he chose to study at Ulster, Nathan said:

“I chose Ulster firstly because the Computing Systems degree ticked every box for what I needed career-wise. Also, a big plus was the fact I was able to complete my degree part-time while still working full time.”

As part of his final year project, Nathan combined his newly acquired knowledge and expertise with one of his hobbies to develop a fantasy football website.

“Once I got my grade, the next goal then was to try and launch it online and see if it was a hit. There are over 1100 users so far and people seem to be enjoying it.”

Nathan manages the website in his spare time and continues to work for Applied Systems, putting the skills he learnt during his time at university to work in an automation role, where he enjoys using code in his every day duties.