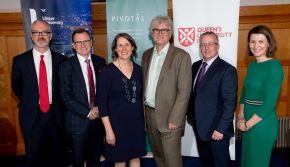 Northern Ireland’s new public policy think tank, Pivotal  was welcomed at an event which was attended by representatives from both the public and private sectors as well as politicians, academics, educationalists and students.

Directed by Ann Watt, formerly Head of the Electoral Commission in Northern Ireland, Pivotal is supported by a broad coalition of interests, and has an academic partnership with both Ulster University and Queen’s University Belfast .

"Think tanks are commonplace in other parts of the UK and they play a fundamental role in shaping and informing policy. Pivotal now occupies an important space – one which was much needed in Northern Ireland. Pivotal is independent and non-political. It is focussed on developing evidence–based ideas and policies to improve our society, economy and public services, and in involving a wider range of people in policy debate. We are grateful to the many individuals and partners, including both Queen’s and Ulster University, which support Pivotal and I hope that our work will benefit public life in Northern Ireland."

"Providing independent research to support evidence based policy is a critical part of the work of universities. For Ulster University, this is our civic responsibility and our work with Pivotal will ensure that Northern Ireland benefits from public policy that is informed by the world leading research being carried out by our staff on a daily basis."

"At Queen’s we are committed to world-class research in both global and local contexts. In a Northern Ireland context, our academics endeavour to find research-rich, evidence-based answers to local questions. Pivotal’s purpose resonates deeply with us at Queen’s and that is why we are pleased to support this new public policy forum in terms of funding as well as academic input."