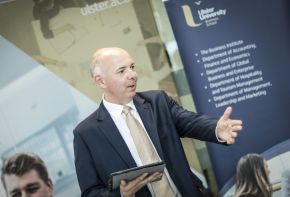 Government support for clusters of traditional Northern Ireland industries is needed to power the local economy on the world stage says HM Homegrown, a new campaign for local SMEs which launched today.

HM Homegrown celebrated the success of Northern Ireland’s small businesses, which make up over 99% of the local business sector, by recognising the Top 50 ‘bread and butter’ firms at an event at Titanic Belfast.

The results confirmed that the entrepreneurial spirit is alive and well in Northern Ireland, which boasts more homegrown businesses per head of population than Wales, Scotland and all regions across the North of England.

Almost 75% of them operate in just three sectors - manufacturing, construction and wholesale/ retail. 21 are based in County Antrim (six in Belfast alone), 10 in County Down, 9 in County Tyrone, 8 in County Armagh, and 1 each in Counties Londonderry and Fermanagh.

Altogether, the league leaders earned just over £100m in operating profit in their last reporting year on a turnover of £1.6bn. Almost £170m in wages and salaries was paid out to 5,822 employees. 32 out of the 50 businesses are family-controlled.

In the three leading sectors,13 businesses were involved in Construction, 12 in Wholesale/Retail, and 11 in Manufacturing. Ten of the Top 50 were involved in food production and distribution, 6 in car sales, and 4 in shopfitting and joinery.

“The economic impact of the 50 companies listed in the Harbinson Mulholland / UUBS Research is considerable generating as they do £1.5 billion in revenues and wages of almost £200m. These companies act as key enablers of Northern Ireland’s entrepreneurial ecosystem, an ecosystem that Ulster University Business School is proud to be part of. The results of this research demonstrate that just because businesses are local in origin does not imply they are not global in ambition; that because they are from traditional sectors does not mean they are not modern in outlook. Indeed local homegrown businesses have a sense of place and origin that can really create competitive advantage.

Northern Ireland has demonstrated its ability to sell its agri-food, manufacturing and construction products and services overseas, but internationally successful companies tend not to emerge in isolation.

Domestic competition drives innovation, efficiency and productivity improvements, which in turn develop businesses which can take on any competitor across the world.  As a result, there is merit in Government identifying the most appropriate ways to support the continued growth of successful clusters to help power the economy into the future.

It is also clear, given our findings, that economic transformation requires us to build from existing industries and encourage growth across all industry sectors, including low, mid and high-tech firms."

Darren McDowell, Senior Partner of Harbinson Mulholland said that homegrown businesses were the backbone of the practice’s client base, adding:

"The Top 50 list underlines the vibrancy of this group of companies and the spending power they give to local communities through employment.

“Attention is often focused on other sectors, but this research demonstrates the continued importance of traditional businesses and industries to the local economy and the extent to which they can be successful.

“Although a diverse economy with successful businesses across many sectors is important, a small economy such as Northern Ireland cannot be world-class in every area, hence the need to focus on sectors where we do best.

“With the outcome of Brexit still putting a question mark over how we do business in the future, it is more important than ever to play to our strengths and ensure that we support successful clusters in doing great business around the globe.”

The full Top 50 HM Homegrown list can be accessed at www.harbinson-mulholland.com