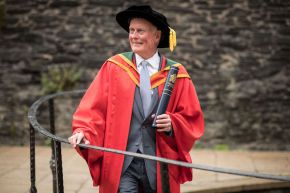 A trustee for various voluntary organisations, John Hunter is receiving the honorary degree of Doctor of Laws (LLD) from Ulster University today for distinguished services to the University as Pro-Chancellor and Chairman of Council.

A previous Permanent Secretary for the Department of Finance and Personnel he served 37 years in the Civil Service before leaving in 2007 to work as an independent consultant. In his early career John was the first Director General of the International Fund for Ireland and a Harkness Fellow at Cornell University in America where he studied for an MBA. The majority of his Civil Service career was spent in the Department of Health and Social Services where he held the post of Chief Executive of the HPSS Management Executive.

In his various roles within the Civil Service he had responsibility for value for money and efficiency and led policy development initiatives across the HPSS, Housing, Urban Regeneration and Community Development/Voluntary Sector fields.

John became a member of Ulster University Council in October 2008 and has served tirelessly since on the Communications & External Affairs Committee, Audit Committee (which he assumed the chair of in October 2009) and the Organisational Development Committee. Appointed Pro-Chancellor in February 2015 he became Chairman of Council in August 2015. John also chairs the Governance, Nominations and Remunerations Committee and the Honorary Degrees Committee.

“I am very humbled to receive an honorary degree at Ulster University, where I have the honour of serving as Pro-Chancellor and Chairman of Council. I have had the opportunity to see first-hand the level of knowledge, skills and confidence that graduates from Ulster University gain during their studies. It means a great deal to be among a prominent group of honorary graduates and I would like to offer my warmest congratulations to all students graduating this year in the expectation that they will be terrific ambassadors for Ulster University.”