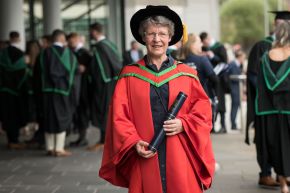 An inspirational role model for countless women physicists, Dame Susan Jocelyn Bell Burnell will receive the honorary degree of Doctor of Science (DSc) from Ulster University today for her services to astrophysics and the promotion of women in the fields of physics and astronomy.

Credited with "one of the most significant scientific achievements of the 20th Century", Bell Burnell discovered the first radio pulsars as a Postgraduate student in 1967. Whilst her thesis supervisor Antony Hewish and astronomer Martin Ryle were awarded the Nobel Prize for the discovery Bell Burnell was excluded despite having been first to observe and precisely analyse the pulsars.

Growing up in Lurgan, where in her early years girls were not permitted to study science, her passion for astronomy grew from visits to the Armagh Planetarium which her architect father helped design. She went on to become the first female President of the Royal Society of Edinburgh as well as President of the Royal Astronomical Society and is currently Visiting Professor of Astrophysics in the University of Oxford.

A generous, inspirational role model in 2018 she won the Breakthrough Prize, worth £2.3 million, for her discovery of radio pulsars donating all the money to fund women, under-represented ethnic minority and refugee students to become physics researchers.

“Thank you, Ulster University, for this honour! I am happy to have another connection with N. Ireland, even though it is a long time since I lived here. Congratulations to all those graduating today and all best wishes for the future.”