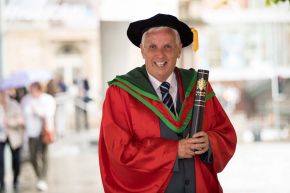 Michael  Hutton  is  receiving the honorary degree of  Doctor of Science (DSc)  from Ulster University for services to addressing segregation and the development of young people through education, sport and community engagement.

Segregation on religious grounds remains strong in  Derry~Londonderry  with  social division.  Through his leadership of the Foyle Cup youth soccer tournament  Michael  has striven to address  the  segregation. In support of the historic Good Friday Agreement, Michael then a local school teacher, launched the Foyle Cup in 1992  with just eight competing teams. Since then his energy and passion for football, combined with his strong belief that cross-community sport can contribute so much to society has grown the tournament into one of Europe's premier youth competitions.

In 2018 the tournament welcomed 370 teams and over 6,500 children to take part in the six-day festival of football throughout  Derry~Londonderry, Strabane, Limavady, Coleraine and Donegal. The tournament attracted major teams from the UK  as well clubs from across Europe, the USA, Canada and Africa. As Chairman of the tournament, Michael is the driving force and champion. He works closely with sporting partners and sponsors to ensure its continuing growth as a key part of the events calendar in  Derry~Londonderry.

Alongside these sporting credentials,  Michael worked for over 30 years in the primary sector in Derry, with a passion for inspiring young minds and a commitment to ensuring that every child achieves their potential.

“It is a great honour to receive this honorary degree from Ulster University in recognition of my civic contribution in Derry City and Strabane Council area. When I launched the Foyle Cup youth soccer tournament, I hoped that it would demonstrate the power of cross-community sport and foster meaningful and lasting friendships. I am deeply moved that the Foyle Cup has become a platform for sustained cross-community interaction and I would like to dedicate this award to the playersand coacheswhomake this feat possible.”