All for the love of Irish 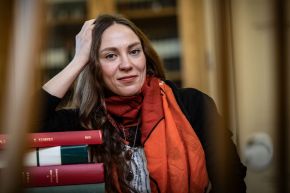 Originally from St Petersburg, Ksenia has always had an interest in mythology and as a young child became fascinated with Celtic mythology and the tales of Cú Chulainn, the great Irish warrior.

“It began as a hobby when I was 13 or 14. My dream was to study texts about ancient kings of Ireland in Middle Irish and analyse them.”

In order to make her dream a reality Ksenia decided to train in languages. She, speaks four languages including fluent English, French, and Polish. From there Ksenia began to read a lot about the Irish language and while studying a master’s degree in Cork took an intensive one year course in the subject.

Completing a PhD is a challenging task. Ksenia says this was however counterbalanced by her love of the research and the support she received from her supervisors.

“The PhD is a challenge in any discipline and the Irish language is very interesting. There are no days off, it’s always on your mind and becomes your world. I was eating, living and breathing it! When you are passionate about your subject though you don’t care how much time you spend reading books and writing. I also received great support from my supervisors and being able to work with them was key in my decision to study at Ulster University.”

During her studies Ksenia also had the opportunity to travel and spent three months in France studying at the University of Western Brittany.

Ksenia is currently living in County Cork and is now looking at research opportunities across the country. With no plans to return to Russia she says she has been made very welcome by Irish people and feels it is symbolic that she ended up studying in Derry~Londonderry, the city founded by St Colmcille.