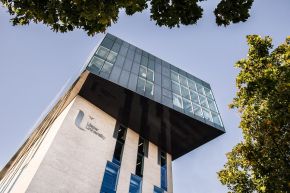 Ulster University has reaffirmed its position as Northern Ireland’s civic university by pledging to put the economy and quality of life in the local community top of its list of priorities.

Ulster University joins 30 other institutions – which include many of the best-known names in higher education - in committing to produce a “Civic University Agreement” in partnership with local government and other major institutions.

The new agreement is a key recommendation in a report published today by the Civic University Commission set up by the UPP Foundation and chaired by the former Head of the Civil Service, Lord Kerslake.

The report sets out how universities like Ulster University have the capability, opportunity and responsibility to support the places where they are based to solve some of their most pressing and major problems.

These issues range from are helping local business in Northern Ireland adapt to technological change, to boosting the health of local people, improving education for school pupils and adult learners, and training and developing new civic leaders in every field from politics to the arts.

The report aims to help universities like Ulster University build on the excellent work that many of them are already carrying out in these areas, working alongside councils, employers, cultural institutions, schools and further education colleges.

“As Northern Ireland’s civic university with four regional campuses, our sense of civic responsibility is at the heart of what we do and why we do it. Our partnership approach to widening access to education and educational attainment ensures that we deliver meaningful social and economic change across the communities in which we operate while making a global impact on industry with highly skilled graduates and world-class research. As we join 30 institutions today at the launch of the “Civic University Agreement” we are reaffirming our commitment as a civic university to continue to proactively contribute to the full spectrum of intellectual economic, social and cultural life of Northern Ireland.”

“The deep economic and social changes that are happening in Britain today have, alongside Brexit, made the civic role of universities even more vital to the places they are located in.

The civic universities of the Victorian era were founded as expressions of civic pride, and as a way of sharing knowledge and opportunity at a time of rapid change.

We are now entering a new industrial revolution when it will be even more vital that knowledge is accessible in as many communities as possible.

It is not just people outside university grounds who will benefit. Universities are under unprecedented challenge and need to find a broader base of support. Universities need to be part of a community which is engaged, supportive and shares objectives.”

Lord Kerslake, the chair of Sheffield Hallam University, and a former Chief Executive of Sheffield City Council and Permanent Secretary at the Department of Communities and Local Government, added:

“Universities have an irreplaceable and unique role in helping their host communities thrive – and their own success is bound up with the success of the places that gave birth to them.”

“Universities have the ability to make a real difference to the places they are located in through reinvigorating their civic role. But this is not just a responsibility, it’s also an opportunity.

This is an important report with concrete recommendations that all universities will want to consider. The UPP Foundation created the commission to look at what it means to be a Civic University in the 21st Century and ask local people what they wanted from their local institution.

We know that many universities want to build engagement with the community around them. It’s excellent news that such an impressive list of institutions has already signed up and the UPP Foundation strongly endorses the report’s findings.”

The report warns that there is a danger that any cut in the resources available to universities – for example, a reduction in student fees without the deficit being made up in funding from the Treasury - will mean that work already being done in this area – like help provided to schools and further education colleges – could be slashed.

The report was based on evidence-gathering sessions held across England. The authors also commissioned opinion polling and focus groups in cities and towns to hear from the public what they wanted from their local university.

This research discovered communities welcome opportunities to connect with universities, and there is great local pride about how universities put their hometown on the map.

The report says that the Government needs to fundamentally review policies to support further civic engagement by universities. Until the recent creation of an industrial strategy, government has for many decades been too indifferent about places within the United Kingdom – contributing to some regions falling behind.

But universities can take a vital step at this pivotal time by adopting the Commission’s idea of a Civic University Agreement setting out what they will offer local communities and which major local strategic needs they will seek to address. All this needs to be based on listening to the local community.

● Understanding local populations, and asking them what they want. Analysis of their place and people’s priorities are essential.

● Understanding themselves and what they are able to offer.

● Working with other local anchor institutions, businesses and community organisations to agree where the short, medium and long-term opportunities and problems lie for communities. Linking with local authorities and other local plans, such as the local industrial strategy is particularly important.

●  A clear set of priorities. A process of agreeing clear priorities will therefore be necessary and, again, this is where collaboration and aligning resources with local authorities, LEPs (Local Economic Partnerships), NHS bodies and the like can help to identify the live issues that universities can most usefully help with.

University of the West of England