Father of two graduates with newfound sense of direction 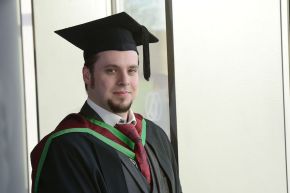 After several years of struggling to find the right career path, Derry~Londonderry family man Eoin took a leap of faith and decided it was the perfect time to enrol in Ulster University’s MSc in Professional Software Development. This path would lead Eoin into one of Northern Ireland’s most buoyant and burgeoning employment sectors.

The father of two has conveyed his difficulties over the last decade, describing the journey which encouraged him to give up full-time work for full-time study.

“With a Bachelors and Masters degree in Music I had hoped to pursue a career in music but unfortunately this didn’t work out as I had originally planned.”

Instead of following a career in music as he had once imagined, Eoin found himself working in a call centre, providing technical support in a role that lasted 7 years longer that he had intended.

“After those 7 years, my wife and I decided to move back home with our daughter. I had to find a job and unfortunately, once again, I found myself working in a technical support role that was practically the same as the job I had progressed on from years earlier.”

Further to this, Eoin was then unfortunately made redundant. Recognising that he had a family to support, he explained that this was when he decided to take decisive action and get back on track.

“That was quite a difficult time, but it was a great catalyst for change. I went back to the drawing board and surprisingly, having previously developed websites and with some experience in coding, I realised that I really enjoyed it and I could finally envisage where I wanted to build my career.”

Knowing it was going to take a lot of work to get to where he wanted in his potential newfound coding career, Eoin spent the next year working and saving as much as he could to enable him to return to education. After beginning his year in Ulster University, it was clear that this would present multiple challenges, including impacting on his relationship with his children.

“When I started the course, my second child Ciaran was only 3 months old, and although my wife Aine was amazing throughout the whole year, entertaining the kids whilst I studied, the entire year was extremely intense for us all.  Treating it as a full-time job, I was going to class 3 days a week and I was working the other 2 days. I would also do a day or so of study at the weekend when I had assignments to hand in. There is no way I could have done this without Aine by my side.”

With his wife’s support and his strong sense of determination, Eoin made sure to put in the maximum effort required, recognising this course was his opportunity to launch into a new career. Looking back, there were obvious difficulties that the family unit faced. Eoin describes the most difficult part of all.

“On Father’s Day, I got a card from my daughter Aoife, which said, ‘My daddy’s favourite thing to do is work’. That was extremely tough for me.”

However, it seems all the hard work and sacrifice was worth it as Eoin successfully secured a Software Engineer position ahead of graduation and has big family and career plans to look forward to; the only place to go from here is up.

“I will most definitely be making up for my absences over the last year so there will be plenty of time for family days out this year. I have already started my new position as a Software Engineer so I am extremely focused on getting up to speed and stuck in as quickly as I can. Every day is a school day, but I am really enjoying it, not only that, but I feel very lucky to have been able to take the time away from full-time work to reskill and move in a new direction.”