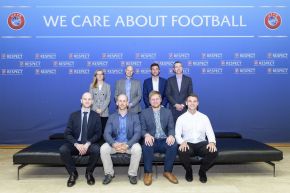 A new European-wide study by Ulster University into player career transition out of football to protect wellbeing provides key recommendations for UEFA, the administrative body for association football in Europe.

Like many sportspeople, footballers dedicate their lives to their sport, often starting their professional careers at a very young age. One serious injury, drop in form or termination of contracts can bring flourishing careers and aspirations to an end, research has found that many footballers are ill-equipped to deal with this transition and the psychological consequences.

Funded by the UEFA Research Grant Programme, research was conducted to explore the views of football associations across Europe on dual careers, wellbeing of players and coaches and to provide recommendations on how football associations, players and coaches can be better supported. The project included a review of literature, survey responses from 28 Football Associations across Europe and interviews with ex-professional players on what they would advise younger players to do in preparation for transition out of football.

The literature review indicated a dearth of interventions that promote dual careers in football. The European guidelines for the promotion of dual careers in elite athletes was only partially taken up by football associations, and there was still work to be done in terms of raising awareness of the dual career guidelines to associations. Research has highlighted that those athletes who have gained academic qualifications are better prepared to deal with their transitions from the athletic/sporting sphere. They cope with anticipated and unexpected exit from sports better with the potential to make a positive impact to both the workplace and society at large.

The survey of football associations, player associations and league representatives highlighted the need to consider mental health, wellbeing and welfare training for players, and coaches with the recommendation that proactive attempts are required to reduce the barriers and promote facilitators of dual careers in the form of raising awareness of educational opportunities to young players and their families. The football academy environment in which skill performance is developed should also include the encouragement of educational and psychological development beyond an emphasis on football performance.

“Professional football is an all-consuming career which can come to a cruel end via injury or retirement if not adequately supported. Our research looks at ways to protect the wellbeing of players making the transition out of football and recommends the promotion of dual careers and better mental health and wellbeing support to players and coaches.

Football would be much better for our top players if consideration was given to the European guidelines on dual career progression. If football associations across Europe implement even some of our recommendations to players we will see a marked improvement in player transition out of football which will have a positive effect on wellbeing.”