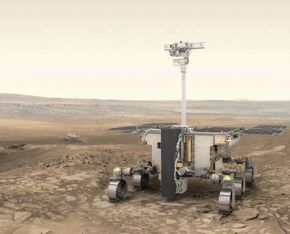 Ulster University researchers have been awarded funding from the UK Space Agency to assist the European Space Agency in determining the optimal route for the ExoMars rover, set to land on Mars in 2021.

The funding, part of a £375K award secured by the Environmental Sciences Research Institute at Ulster University will be used to investigate the effect of wind on the landing site for the ExoMars rover, a mission that will search for signs of past and present life on Mars and investigate how the water and geochemical environment varies.

The ExoMars rover, named Rosalind Franklin has been fitted with a cutting-edge, high-definition camera, called PanCam which will be positioned on top of the rover’s tall mast and is fitted with sensors to scan the planet’s surface in search of minerals or water. ExoMars has the capability to drill down further than any other rover to date and once it identifies an area of interest it will travel towards it a 1.2m per hour, drilling down into the surface to take a biopsy of the land. It will then store the land samples in a self-contained laboratory where it will be examined.

The three-year project in partnership with The Open University, University of Aberystwyth and Ulster University aims to understand how the wind has shaped the Oxia Planum site on Mars where the European Space Agency ExoMars rover will land in March 2021. Using Ulster University’s state-of-the-art 3D computer modelling techniques, researchers will replicate winds that flow over the surface of Mars and the impact the surface terrain will have on ExoMars rover’s route.

“Using large scale and smaller scale atmospheric models we will look at how the land surface on Mars can force winds into certain directions and alter wind speeds. The changes to wind patterns observed will help shape the modern and ancient surface of the planet.

“As loose sand deposits can be a navigational hazard to the rover during its traverse across the surface, our work will assist the European Space Agency in deciding the optimal route the Rover may take over the months and years after landing.”

“We will use field studies on Earth to test how the ExoMars instruments can be used to tell us about the effects of wind on Mars once we land. The main goal of the mission is to bring together the site’s environment history, as investigated from orbit, computer models and on ground observations to give the best possible information about the sites erosional history and what this means for biosignature (evidence of past or present life) preservation.

“After landing we will analyse the landscape using the ExoMars PanCam camera system to work out how the wind has affected the landscape at the local scale and try to calculate the amount of wind erosion there has been. We’ll use this information to help ExoMars’ main science goal; to search for preserved evidence of ancient life on Mars.”