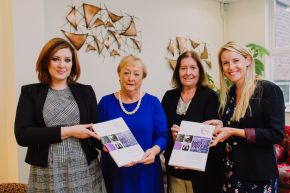 An Ulster University research study has found how experiences of and responses to domestic violence were impacted by the Northern Ireland conflict and the changes that have taken place since the Good Friday Agreement.

The study was funded by the Department of International Development (UK) as part of the Political Settlements Research Programme, based at the University of Edinburgh, and is the first study of its kind comparing findings on domestic violence during conflict to what happens afterwards.

With support from Women’s Aid Federation Northern Ireland, approximately 120 women victim/survivors of domestic violence were interviewed; 56 women in 1992 and 63 in 2016.

The key findings from the study show that:

The study makes a number of recommendations including; that the benefits of police reform, the removal of illegal firearms and the regulation of legal firearms should be applied to other societies emerging from conflict given their positive impact on domestic violence. The links between domestic violence, suicide and other mental health problems means that health care professionals need additional training and resources to identify and follow up on cases of domestic violence. The study also recommends that the legislation incorporating coercive control and psychological abuse should not be delayed any further in Northern Ireland.

“The peace process has made a huge difference but there is still much work to do. The research shows that while much progress has been made over the last 25 years, a more consistent approach is needed in preventing and providing support for domestic violence.”

“Domestic violence remains a key problem in our society and one that must be addressed with greater protection for victims through legislative and policy change. It is clear from the research that preventing it has benefits not only for women but for future generations.”

“This is an invaluable piece of research which highlights how far we have progressed in our response to women and children experiencing domestic violence and shows what can be achieved when agencies come together to tackle this ongoing issue.”

You can read the full report at: http://blogs.sps.ed.ac.uk/politicalsettlements/files/2018/07/2018_PSRP-Violence-Report-NI.pdf