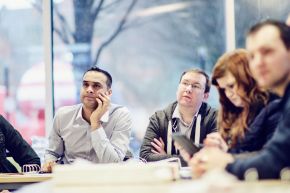 A survey which highlights how public opinion has changed in Northern Ireland since the signing of the Belfast/Good Friday Agreement in 1998 has been launched by ARK – a joint initiative between Queen’s University Belfast and Ulster University - to mark 20 years of the Northern Ireland Life and Times (NILT) survey series.

The three surveys cover a wide range of issues that affect the lives of people of all ages living in Northern Ireland, including: community relations, abortion, sport and physical activity, ageing and ageism, same sex-equality, racial prejudice, children’s rights and views; and social care.

Over the past 20 years, the key findings from the surveys include:

The survey data has played an important role in shaping and evaluating key public policies, such as those relating to community relations and racial equality, and have consistently informed public and political debate, including in highly contested policy areas.

Speaking about the importance of the surveys, Professor Paddy Nixon, Vice-Chancellor and President of Ulster University said:

“Research that has a tangible impact on the real lives of the people of Northern Ireland and beyond is part of the DNA of Ulster University. The Life and Times Surveys have been a vital barometer of public attitudes to the key social and political issues here, making an important contribution to significant civic discussions. They are an excellent example of the long-standing collaboration between Queen’s University Belfast and Ulster University, working together for the good of our local communities and people living across Northern Ireland.”

“The ARK survey series gave the people of Northern Ireland a voice when they didn’t necessarily have one. A key strength of the surveys is that they are flexible and can focus on new topics as they arise.

We hope that the surveys will continue into the future, providing important evidence of public opinion in Northern Ireland across all age groups, and contributing to public policy and academic debates.”

Since ARK’s inception in 1998 over 87,237 adults, young people and children have taken part in the three surveys, which have provided vital evidence about the attitudes of people of all ages living in Northern Ireland and gave them a ‘voice’.

For more information on the ARK survey series and the full publication, please visit: http://www.ark.ac.uk/ARK/