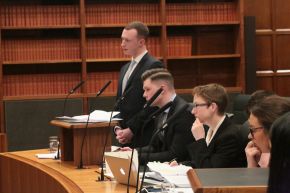 A group of Ulster University Law School students had the opportunity to moot at the UK Supreme Court in London.

Six students travelled to London in February to moot before Lord Kerr of Tonaghmore, formerly the Lord Chief Justice of Northern Ireland and an honorary graduate of Ulster University.

Ulster University law students are encouraged to participate in internal and external mooting competitions, with the help and guidance of the director of mooting, Ciaran White. Mooting is also incorporated in several modules throughout the undergraduate degree. These are intense and demanding events but highly rewarding, giving students a real insight into styles of legal argument that help them to appreciate the role of law in society, including its limitations and deficiencies.

Two teams of three competed against each other, with the Appellants represented by Andrew McFadden, Jordan Thorburn and Danielle Gallagher, and the Respondents represented by Eimear Fanthorpe, Belinda Widocka, and Ben Lowry.

The event was preceded by a tour of the Supreme Court building which allowed the students to visit the Supreme Court library and the Judicial Committee of the Privy Council. The moot itself was recorded by the same audio-visual system used to stream Supreme Court sittings live on the web and this recording will be used as a training tool for future Ulster University mooters.

Ulster’s next major moot will also be before the Supreme Court bench, but will take place in Belfast when it visits in May for the hearing of two appeals originating in Northern Ireland. Ulster University will moot against QUB Law School in the Royal Courts of Justice on 3 May 2018.