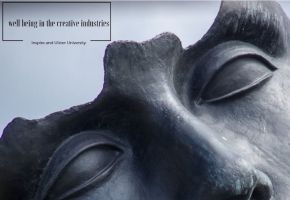 New research from wellbeing charity Inspire and Ulster University has found people working in the creative industries in NI are almost three times more likely to suffer from mental ill health than the general population.

Specific characteristics of the creative sector work environment were reported as contributing to the likelihood of developing mental health problems. Examples included pressure to reach high standards (both externally and internally), irregular work (including contracts, financial security, irregular hours, and working outside the sector), the perceived lack of value placed on their work and the inadequate financial rewards for the work.

Commenting on the motivation behind the research Peter McBride, CEO of Inspire said:

"There might be a popular image of the struggling artist but that becomes a much less romantic notion when it crosses a line into making people mentally unwell. Attracting skilled, creative people is a key element of Northern Ireland’s economic strategy and work artists and creatives produce is an important pillar of our tourism offer.  At Inspire we specialise in workplace wellbeing and so we were interested in learning more about what it’s like to work in the creative industries in NI and identify and possible areas of concern that may need attention and intervention.”

“The results are concerning and unfortunately they corroborate evidence from our broader mental health research programmes at Ulster University, which show the high levels of mental ill health, and suicidality in the NI population, and particular subgroups who may be more vulnerable. We therefore look forward to working with policy makers here to ensure that our evidence can be used to inform strategies and plan services, to help our population flourish.”

“Those who work in the creative sector make an important, varied contribution to our society; these findings show we need to pay more attention to their health and wellbeing. If we value the creative industries, and enjoy music, film and TV, art, writing, and other important creative outputs, we need to act and help support those who produce it.”