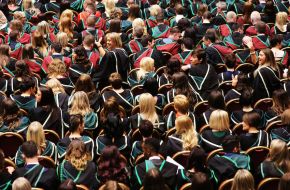 Ulster University will recognise the outstanding contributions of distinguished educators, leaders, sportspeople and humanitarians both locally and globally by bestowing honorary degrees on 14 individuals during upcoming graduation ceremonies.

Bronagh Gallagher, acclaimed actress and singer from Derry-Londonderry and superbike racing champion Jonathon Rea, will join those working across the areas of science, technology, health, arts, education and business who will be honoured for making an exceptional contribution to their field.

The Director General of BBC, Tony Hall is to be recognised for transforming the BBC, along with the promotion of skills, employability and the regeneration of local communities while Professor Alan Livingston is being honoured for his services to higher education.

County Tyrone native Sarah Friar, named as one of the most influential female tech execs in Silicon Valley is to be honoured for her service to the international technology industry.

For his contribution and influence on Irish traditional music Professor Dermot Diamond is being recognised while Zoe Seaton, artistic director is being honoured for her contribution to the arts with acclaimed pianist and vocal coach Ingrid Surgenor.

Former Dean of Belfast The Very Reverend John Mann, The Very Reverend William Morton and Feargal McCormack, are all being recognised for their civic contributions while Professor Ed Marram is being honoured for his academic and technical accomplishments.

For services to health Mohammed Jalie and Elaine Way, former Chief Executive of the Western Health and Social Care Trust are recognised.

“Each year thousands of students graduate from Ulster University ready to make a positive contribution to society.  In doing so, it is important that they have role models they can look to who are making a real difference in the world around them.

“Our honorary graduates demonstrate leadership, integrity and progressive thinking, determination, talent and creativity all of which are central to the core values and character of the University.

“Those who are being honoured also represent a diverse range of sectors locally and globally in which our graduates are employed and are individuals who can only inspire our students as they begin to shape their own future paths and direction.”