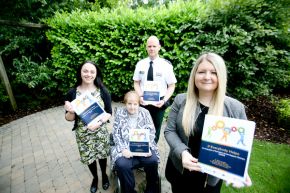 Latest Police Service of Northern Ireland (PSNI) figures show there were 29,913  incidences of domestic abuse recorded from April 2017 until March 2018 * in Northern Ireland, the highest level since 2004/05.

A recent study from Ulster University and Queen’s University Belfast has shown that the appointment of Domestic Abuse Support Workers (DASW) has improved partnership working between the Police and Women’s Aid ABCLN** and consequently provides enhanced support for victims.

An Ulster University report in August 2015 called for specialist Domestic Abuse Support Workers to be placed alongside officers to best meet the needs of victims.

DASWs develop an effective co-ordinated interagency response with the PSNI to tackle domestic abuse, whilst also ensuring that victims have improved access to services and support in the local area. They increase the level of support for victims in the aftermath of an incident through greater engagement between police officers and a variety of support services.

Ulster University researchers, alongside colleagues from Queens University Belfast. Women’s Aid ABCLN and the Police Service of NI reported on research which interviewed DASWs, police officers, Women’s’ Aid workers and victims of domestic violence in order to establish the usefulness of this new specialist role in Northern Ireland.

68 percent of police officers surveyed reported that DASW had a positive impact on their work with victims of domestic violence.  Additionally, 96% of officers reported that having a DASW available contributed towards helping to provide a coordinated response for victims and their children. Over half of officers acknowledge that DASWs reduced time and resource for the PSNI in dealing with cases.

“This research highlights the importance of collaborative working between the PSNI and Women’s’ Aid in meeting the needs of victims of domestic violence and their children. The DASW’s acts as a lynchpin providing a sensitive, pro-active advocacy, support and information service to victims. We are delighted that the sector took one of our recommendations from our 2015 report titled ‘Every Voice Counts’, implemented it, and asked us to do a small evaluation of its effectiveness. Our research is a call to action for an increase in DASWs across Northern Ireland Police Stations and a larger scale evaluation of the role.

“The study findings have helped emphasise some of the benefits of specialist support roles within services including, improved connectedness between services, positive impacts on police responding to incidents of domestic violence and better access to support services for victims.”

“The implementation of the DASW role demonstrates the continued efforts and commitment of both the PSNI and Women’s Aid ABCLN in responding and supporting victims of domestic violence in Northern Ireland.  Our research across multiple reports has shown that no single service alone can meet all the needs of victims; rather a collaborative and co-ordinated response is required.”

“I know I wouldn’t have got through it, if it wasn’t for her. I wouldn’t be sitting here today. She’s my total support”

“She [DASW] is always making sure I know what’s happening [with my case], even if nothing is happening. She’ll give me a ring, ‘it’s going through the court, you’ll have a date soon, I’ll go with you’. And she is, she’s going with me tomorrow, and I don’t know if I could do it if she wasn’t”

“Women’s Aid ABCLN welcome this study and the recommendations which endorse those in their earlier work advocating a domestic abuse support worker be employed and located with response officers in PSNI stations. The current strategy calls for multiagency working and cooperation and this an example which victims say has enhanced their experience of interacting with police officers. We will lobby funders and decision makers to gain support and finance to sustain these two workers in post and the roll out of this initiative regionally in support of vulnerable victims.”

“We welcome the collaborative working between the PSNI, Women’s’ Aid and Ulster University in reviewing the role of the Domestic Abuse Support Workers. In particular, we were pleased to be able to capture multiple perspectives of the role from the DASW’s themselves, from staff in Women’s Aid, victims of domestic violence and from our officers in the PSNI. All stakeholders have reported the benefits of these specialist roles in supporting victims of domestic violence.”

Anyone suffering from domestic abuse is encouraged to contact their local police on the non-emergency 101 or in an emergency always call 999.

A 24-hour Domestic and Sexual Violence Helpline is available to anyone who has concerns about domestic or sexual violence, now or in the past on 0808 802 1414