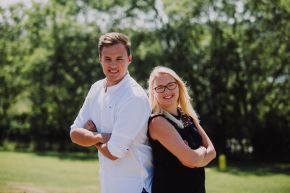 A little competition between siblings is to be expected but the stakes were high for Eleanor and Matthew Heath who have been studying the same course for the past four years. Luckily for them there will be no family feuds as both graduate today with first class honours in Computing.

“I really enjoyed my four years at Ulster University. As well as my course I had the opportunity to participate in competitions, mentoring and also complete a work placement.

“My brother and I are highly competitive with each other, although sometimes he would not admit this! Having him on the same course was all the more reason to achieve the best grade I could. It was also very encouraging and motivating to have someone at home who was under the same deadlines and stresses.”

“We are definitely competitive but it pushed us to do the best we could and in the end we got the result we both wanted, first class honours. I could always rely on Eleanor to let me know when the marks were released for any assignment as she’d ring me the second they were out to see if she had beaten me or not!

“Our other sister Katie graduates in Brighton later this year but she is delighted that we were able to graduate together without too many major disagreements over the years and doesn’t feel too left out!”