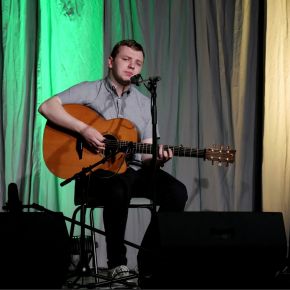 Local folk music sensation Jack Warnock, has graduated from Ulster University with a first-class honours degree in Music and Irish.

It’s been a busy year for Jack, who earlier this year was nominated for the BBC Radio 2’s Young Folk Music Award 2018.

“When I found out that I had been nominated for BBC Radio 2’s Young Folk Music Award, I was over the moon! It was a great experience and a real honour to take my place alongside leading names in the folk scene.”

Jack has loved music from a young age and he started playing the piano at the age of 7 years old. He then developed an interest in traditional music and at age 15, he started playing the mandolin and guitar. He has already established a name for himself performing in what he describes as ‘dream venues’ namely the National Concert Hall, Dublin and the Royal Albert Hall in London.

Speaking about his decision to study at Ulster University, Jack said:

“I chose to study for a Degree in Irish with Music because I always enjoyed learning and speaking Irish. When performing I also sing in Irish which garners a great response from the audience and adds another dimension to my performances. After discovering there was a course based, at the Magee campus, on the two subjects I loved, I couldn’t resist!"

“I also received tremendous support from the staff at Ulster University who understood the difficulties of balancing a music career while studying full time."

Since completing his studies Jack’s focus is pursuing his music career.

“I am working on some music exciting projects and have been in the studio recording some new material with for a new trio that I am part of. It’s always go, go, go!”