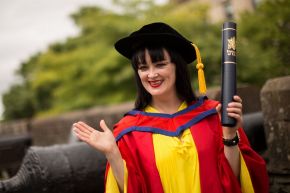 Internationally renowned actor and singer from Derry-Londonderry, Bronagh Gallagher, received the honorary degree of Doctor of Letters (DLitt) for her outstanding contribution to the arts.

As an actor, she has been celebrated for delivering performances of great warmth, humour, passion and honesty. She first came to public attention in Alan Parker's film version of The Commitments, written by Roddy Doyle, which established Ms Gallagher as a powerful and talented performer.

In addition to her successful career in the creative industries, Bronagh Gallagher has retained close links to her home city. She has been actively involved with the arts and community sector, nurturing the talent of young people and helping to develop the cultural and social life of the city and of Northern Ireland.

Bronagh maintains a commitment to disadvantaged communities and cultural development, working with organisations such as Greater Shantallow Community Arts (GSCA), most notably in her performance as Agnes, ‘the Florence Nightingale of Derry’. This was a feature film produced by GSCA and starring a number of locally based professional and community actors.

"I am so pleased to have received an honorary degree from Ulster University. Throughout my career as an actor I have treasured seeing people from Northern Ireland pursue careers in the arts and I have witnessed exceptional talent. I would like to dedicate this award to everyone who is pursuing a career in the arts and expanding on our rich culture here."