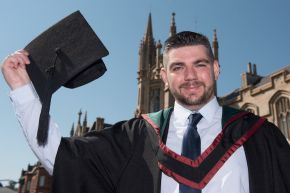 After failing his GCSEs and battling and beating cancer, father of three Ciaran graduates today from Ulster University with a first-class honours degree in Law.

Raised by his mother in Derry/Londonderry Ciaran was the eldest of four children and sacrificed his education to keep their home life stable for his younger siblings.

He spent many years doing various jobs and was driving a taxi when he was persuaded by his partner, among others, to return to education. Ciaran completed an access course in North West Regional College which is run in conjunction with Ulster University, with one year of intense study providing him with a route into University.

“I left secondary school with no qualifications and my teachers had written me off.  I always felt that I had missed the opportunities that studying at University can bring and as the years went on. But then I found out about the Ulster University widening access programme and choosing to enrol was one of the best decisions I have ever made. I quickly realised that I could sit and pass exams and ultimately that I could fulfil my dreams and get to University. Law was always the course I wanted to enrol in, I just never thought I would get enough points to study it.”

While completing the access course Ciaran got a devastating call from the doctor advising him that he had a tumour in his neck that needed to be removed.

“My cancer diagnosis shook me to the core, I was in hospital for six weeks and was very ill during that time. With the help and support of my lecturers I came out fighting and in the second year of my studies I was given the all clear. I’m now more focused than ever to chase the career of my dreams, I’m hoping to take the bar exams as I have dreams of becoming a barrister working in human rights. In September, I’m getting married so lots to celebrate this year.”