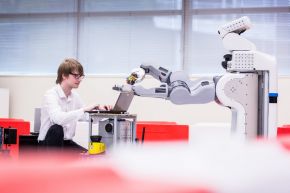 A rapid reboot of Northern Ireland’s economic strategy is required to prepare the region for a technology-led modern economy which could see nearly half a million local jobs at risk from automation in the next 10 years.

The 2017 Connect Knowledge Economy Report, supported by Bank of Ireland UK and independently produced by Ulster University Economic Policy Centre, warns that radical action is needed to take advantage of the massive global growth in technology.

It is calling for the creation of a dynamic coalition of Government, public bodies, private sector business and Universities, aligned and working to deliver practical solutions to economic technology challenges.

Although Northern Ireland is the 2nd fastest growing knowledge economy in the UK for the 4th consecutive year, the hard-hitting report warns that profits, salaries and productivity are slowing down.

For this year’s report, Connect at Catalyst Inc commissioned research into the potential impact of automation - one of the biggest external forces changing the working environment in the 21st century.

Ulster University’s Economic Policy Centre estimates that up to 423,000 NI jobs will be affected by automation in the next decade.

The research, informed by a data model from Oxford University, identifies a comprehensive table of local occupations which will be impacted, with Manufacturing the most vulnerable at Level One.

Steve Orr, Director of Connect at Catalyst Inc, speaking on behalf of the Connect Leadership Board, which is made up of members from business and academia, said the report was a significant wake-up call for everyone,

“The strength of our Knowledge Economy cannot be allowed to wither because we do not act on a well-indicated slowdown, particularly when re-focusing investment on automation and robotics will boost competitiveness and secure more jobs in the long term”

“A major re-think is also required on how we prepare our young people for work, since 65% of today’s primary school children will go on to jobs which don’t currently exist. We have to look closely at the skills which support employment in this age of technology, such as complex problem solving, fluency of ideas, critical thinking and resilience.”

Ian Sheppard, Bank of Ireland UK Regional Director for NI and report sponsor, said the Knowledge Economy had made some great strides forward,

“However, this year’s findings show we’ve reached a plateau and indicate a need to reboot Northern Ireland’s Economic Strategy if the region is to be prepared for the rapidly changing modern economy.”

“The Industrial Strategy for NI, which has remained in draft form for the last 12 months, urgently needs to be revisited and actioned to ensure greater focus on developing talent and investing in technology, both of which are critical to the region’s long-term prosperity.”

“My findings showed that Knowledge Economy activity growth was strong following the recession, but the rate of growth was beginning to slow.  Automation won’t wait for NI and therefore reinvigoration, refocussing and action is required if NI is to translate activity into tangible economic outcomes.”

Steve Orr went on to warn that NI could not carry on thinking the economy will simply assimilate the challenges it faces without serious policy change and robust planning,

“The need for a massive step change in Government policy will force us to address spending priorities we have previously avoided – including, for example, whether the economy and education can continue to pay for inefficient public spending.”

As a first step The Future of Work in NI Solutions Summit, 28th February organised by Connect at Catalyst Inc, puts some of the world’s expert speakers on the impact of Automation, in front of SME business leaders, academics and policy makers, and offers examples of local leaders in the application of automation, including companies such as Coca Cola, Moy Park, Deloitte and Liberty IT.