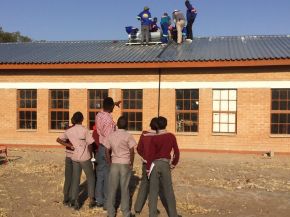 Ulster University has developed an off-grid energy access project in Botswana, which has the potential to transform standards of living for people in Sub-Sahara Africa.

The pilot ‘SolaFin2Go’ field trial is the first of its kind and invests in reliable, affordable and secure distributed energy solutions for communities with unreliable or no grid connectivity.

‘SolaFin2Go’ is powering buildings in Botswana including a primary school with 150 pupils. The system installed at the school generates up to 2kWh of electricity per day to power computers, a refrigerator, and other electrical equipment including a much-needed outdoor security night-light. The prototype also provides up to 100 litres of hot water each day for kitchen use.

More than 1.3 billion people worldwide lack access to electricity, and reducing this number is critical to bringing opportunity and prosperity to developing countries.

“Prior to the commencement of this project, the school spent up to £100 per month to run an inefficient and unreliable generator, which required staff to regularly drive 40km to the nearest petrol station. There was previously no fridge at the school and hot water was a rarity as it had to be produced laboriously by boiling pots of water on open wood fires or on burners fuelled by expensive bottled gas.”

The project finishes in March 2019 however funding is actively being sought to continue with a second larger project. Distributed renewable power generation networks are designed to bring electricity and heat energy to those rural households and communities that are not on the main power grid.

“This project has the potential to transform standards of living for over 600 million people in Sub-Sahara Africa who live without access to electricity, with 90% of the population directly burning solid fuel for cooking, boiling water, lighting and heating. The continued lack of access to proper energy supply gives rise to detrimental socio-economic conditions, poor health and well-being and environmental concerns exacerbated by continuing population growth and urbanisation.”

More information about the project can be found at www.ulster.ac.uk/solafin2go