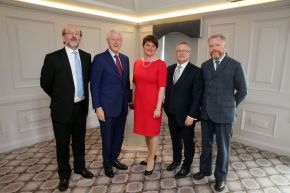 Dublin City University, Ulster University and University of Massachusetts (UMass) have come together in a joint initiative to renew and enhance the peace-building vision of the Clinton Centre in Enniskillen.

Dublin City University, Ulster University and University of Massachusetts (UMass) have come together in a joint initiative to renew and enhance the peace-building vision of the Clinton Centre in Enniskillen.

Announced today by President Clinton during a visit to Belfast, a new agreement will see the three universities unite to create a new, sustainable operational model for the Centre, in keeping with President Clinton’s commitment to peace and reconciliation on the island of Ireland.

Built on the site of the 1987 Remembrance Day bombing which killed 12 people, the Centre opened in 2002 as a conference and exhibition space.

The new plan will deliver a programme of both academic and cultural activities and events in the Centre over the next three years, in the first instance, with a specific focus on the themes of peace and conflict resolution.

“I’m incredibly honoured that the Centre will make a contribution in shaping what I believe is the most interesting time in human history,”

“Good citizenship in the 21st century requires us all to find ways to expand the definition of “us” and shrink the definition of “them.” So, I’m grateful that the Centre will continue to be a place that supports and empowers students from all over the world with the tools they need to create better tomorrows.”

The following activities are planned for the Centre:

Today's announcement was made in the presence of DUP Leader, Arlene Foster MLA, who welcomed the development, stating,

"I am delighted to welcome President Bill Clinton to Northern Ireland. He is no stranger to us and we deeply appreciate the part he has played over many years in helping to ensure Northern Ireland has a peaceful and prosperous future.  This announcement to remodel and expand the work of the Clinton Centre is a significant boost to Enniskillen in particular and Northern Ireland in general.

The collaborative nature of this project, working in partnership with the three universities who will deliver a significant academic programme, is a model that will benefit all involved as well as boosting the entire area.

As part of the future plans for the Clinton Centre Colin Davidson’s work will be exhibited and this will be widely recognised as a tremendous honour as well as enhancing the profile of the centre.

It is a sad reality that Enniskillen is known to many across the world as a result of the 1987 bomb in the town. I have worked with many of the survivors of the bomb.  A permanent memorial for the victims being located in the Clinton Centre will be a fitting tribute to those who lost their lives and those who still live with the scars."

“In the week in which we mark President Clinton's critical contributions to peace on the island of Ireland through the award of an honorary doctorate at DCU, it is timely to announce our commitment to his living legacy through the work of Enniskillen’s Clinton Centre.  Emblematic of the trauma suffered throughout the Troubles, this Centre will have a significant role to play in the ongoing drive towards healing, peace and reconciliation amongst divided communities.  We look forward to harnessing the considerable expertise of DCU academics alongside colleagues in Ulster University and UMass in helping to create a secure and stable future for all those who live on the island of Ireland.”

“We each bring distinctive academic leadership to renewing the vision for The Clinton Centre. As a civic university, working together with our partner universities, we can transform experiences and outcomes for individuals and communities alike.  Perhaps now more than ever, the learnings from our past have every opportunity to shape the prospects for our future prosperity. Without question, our universities have a constructive and informed part to play in that journey – safe places in which to pose questions, explore solutions, interpret research and harness creativity.

We are thrilled that acclaimed Ulster University alumnus Colin Davidson will have this unique opportunity to capture something of the formidable presence and legacy of a President who committed so much time and energy to the peace process in Northern Ireland.”

Marty Meehan, President of the University of Massachusetts said,

“We are excited about the opportunity to connect our international scholars with those of our partner institutions, Dublin City University and Ulster University, to help us solve global problems, enhance the student experience by providing a global perspective to teaching and research, impact and engage our communities in meaningful ways, and build on the work of President Clinton by creating a dynamic model for transatlantic collaboration.”

Modifications will be required at the Centre to facilitate its expanding role and the expected increase in numbers of users and visitors.  This will be financed by fundraising undertaken in the US, NI, and ROI, along with government support.   The new work will incorporate a memorial to commemorate those who lost their lives and were injured by the 1987 bomb, situated in the area where the Centre is located.