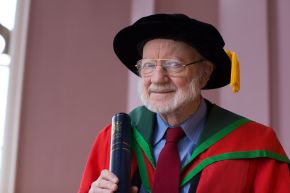 After the ceremony he delivered a lecture entitled: A Life in Science with one foot in the Arts.

Born in Ramelton, Co. Donegal and now based in America, Professor Campbell won the Nobel Prize for Medicine in 2015 for discovering a drug that fights river blindness by roundworm parasites.

The drug, Avermectin, has radically lowered the incidence of river blindness and lymphatic filariasis and has also shown effectiveness against a growing range of other parasitic diseases. In 1987, Professor Campbell led the decision by Merck to distribute the drug for free; which has potentially saved tens of millions of lives in Africa.