Ulster University student in the spotlight for graduation 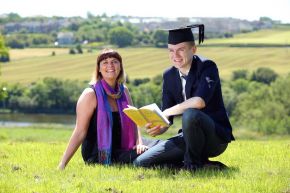 Michael Way, an Ulster University student who has acted on the same stage which catapulted some of Northern Ireland’s most celebrated actors to global fame, will graduate on July 4 with a First Class Honours in English.

He joins a plethora of Irish performers who sprung to stardom on the stage of the Riverside Theatre, most notably the University’s Chancellor James Nesbitt, who took his first steps towards fame as “The Artful Dodger” in the Riverside Youth Theatre’s production of “Oliver” in 1978. Liam Neeson also performed in the theatre during the early 80s, and Van Morrison later recorded a performance on the main stage.

Michael hopes to follow in the footsteps of his legendary counterparts and pursue a career in the performing arts. Reflecting on his time at Ulster University, Michael commented:

“The bonds of friendship that I’ve found are a highlight for me.  Through a mixture of my classmates, my lecturers, and my membership of the UUSU Coleraine Amateur Stage Society (CASS) and the Magee CORE Gaming Society, I have made lifelong friendships.  I would greatly encourage anyone attending university to join a society, as it allows you to meet people across different disciplines and year groups and provides much needed stress-relief as deadlines loom.”

Michael will deliver the student address at his graduation ceremony on behalf of the School of English and History.

The Riverside Theatre is Northern Ireland’s oldest operating professional theatre venue outside of Belfast.  It was commissioned by Ulster University during the 1970s and has been serving Northern Ireland for 40 years.