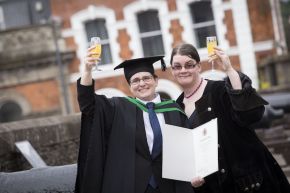 Amanda Spikol (37), a US student living in Derry~Londonderry, has graduated with First Class Honours in BSc (Hons) Psychology from Ulster University at the Millennium Forum.

The Pennsylvania-born student moved to Northern Ireland to be with her wife Xaria (34) in 2013. The pair met seven years ago via an online radio show and began visiting each other back and forth before marrying in the US in late 2012.

Commenting on her experience as an American abroad, Amanda said:

“Living and studying here has been one of the best experiences of my life because it has allowed me to see myself and my culture from an external point of view.

“Where someone is from shapes them in ways that can't be quantified; from slang language and local lore to mindset and perception of the world; we are where we're from and stepping out of that place can offer tremendous insight and the opportunity for growth.”

The change in culture, however, did present a number of challenges for Amanda. She stated:

“Being a non-EU citizen studying in the UK was very challenging, with the political climate being what it is; everyone thinks Americans are great until that non-EU part comes up, however, Ulster University and everyone here went above and beyond to help me out.”

“The entire International Department made orientation so welcoming and have continued to be there for me, answering any questions I had and through national issues (Brexit, etc.) that have come up. Ulster University has been an amazingly supportive place to study.”

Cultural integration within the university has helped Amanda to settle in her new life in Northern Ireland. Describing her most memorable university experience, she said:

“I'd have to say a major highlight that stands out was the exchange trip to University of Osnabruck in Germany in second year. A group of us spent a few days studying there and helping to strengthen the link between our two universities and cultures.”

All in all, Amanda described her time at Ulster University as “a really fantastic experience.”

“Magee campus has a very small-town, cosy feel and everyone, from administrative staff to the academics, seems to really care about the students and the university.”

While her interest in Psychology stemmed from her parents, both clinical psychologists, she stated:

“I’ve always been interested in the brain and its impact on every part of our lives.”

Amanda will return to Ulster University in September to study for a PhD in Psychology to strengthen her knowledge and expertise in the field.

Looking ahead, Amanda and Xaria intend to stay in Northern Ireland for the foreseeable future. She stated:

“My dream is to be a researcher because in these contemporary times where 'facts' are simply which headlines are most popular, research in the social sciences has never been more critical.”