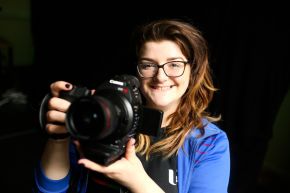 An aspiring filmmaker from north Belfast is set to become one of the first to graduate from Ulster University on July 11 with a BSc (Hons) in Cinematic Arts.

Gemma Carlin-Brannigan is part of the first cohort of cinematic arts graduates, following the course’s introduction in 2014.

Described by the University as having a passion for her subject, Gemma’s work focuses on filmmaking, post-production, editing, screenwriting, directing and entrepreneurship. Gemma’s course has opened the door for her to work on a number of local film projects and sporting events such as the SuperCup NI.

“Gemma has been an actively creative student from day one. Her interest in creating films that connect with the community had an impact among the students and residents in Derry, Belfast and Northern Ireland. Her second-year documentary on teen suicide is a groundbreaking work that opened up new possibilities for our new students.

“Gemma was an exemplary student, combined with determination and hard work for her subject. She was a great team builder and organiser. Her work is both creative and informative displaying a wide range of aesthetic and technical storytelling skills.”

“I was always interested in filmmaking from a young age.  It started out as a hobby but I soon realised I was actually quite good at it and ended up studying Moving Image Arts, Photography and Media Studies at A level.  When it came to choosing a university course, the Ulster University Cinematic Arts programme was a perfect match with my career ambitions.

“Now that I’ve graduated, I want to spend the summer developing my skills and improve on the techniques I’ve learnt at university.  Northern Ireland is becoming a popular destination for big production companies so it’s my ambition to one day work on the next big hit television show.”

During her studies, Gemma gained the opportunity to work on a number of local projects.

“I got to work on a short film project with my course director as well as working with SuperCup NI, capturing photography and creating short videos.  One of my documentaries, #StopSuicide gained a lot of attention and as a result I was asked to speak with various youth groups on the issue.

“It is an honour to be one of the first to graduate from Ulster University with this degree.  I’ve loved every single minute of my time at University and have grown as a person, building on my expertise and making myself ready for employment.”