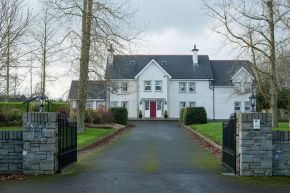 Ulster University’s latest Quarterly House Price Index survey has revealed a slowing down of the Northern Ireland housing market in the final quarter of 2016.

Produced in partnership with the Northern Ireland Housing Executive and Progressive Building Society, Ulster University’s research recorded a decrease in the average house price of 1.3 per cent over the year and 2.6 per cent over the quarter to £150,778. It also indicates an easing back in the volume of sales in contrast to the relatively buoyant conditions that prevailed in early 2016.

Ulster University’s research suggests that despite the decrease in overall average price and volume of sales, both are still operating at a healthy level. It indicates that the negative rates of change may reflect seasonal impacts on the market, but could also suggest a more hesitant market potentially influenced by economic uncertainly.

“The weaker performance of the residential market is reflected across each of the property types. At a regional level there is some variability with a number of areas actually seeing an increase in average average price over the quarter including East Antrim, Londonderry and Strabane, Antrim and Ballymena, North Coast, Mid Ulster, Mid and South Down, and Craigavon and Armagh.

“Ulster University’s price analysis research is supported by estate agents who have a mixed opinion on the current state of the market. Their concerns could reflect the uncertainty of Brexit and the varying forecasts of the UK’s GDP dropping. Likewise, changes in taxation and stamp duty allowances brought forward in early 2016 may now be having a delayed impact on the market.”

Michael Boyd, Progressive Deputy Chief Executive and Finance Director added: “The last quarter of the year is traditionally a slower time for domestic property sales, but encouragingly transaction numbers remained at relatively strong levels. At Progressive, mortgage application levels were 7% higher for the last quarter of 2016 than twelve months ago.

“Regionally the highest property prices and volumes continue in the Greater Belfast area. While eight regions across Northern Ireland witnessed a decrease in the average house price, the regions with increasing prices were predominantly those further from Belfast and those areas which had seen least price appreciation in previous quarters.

“Looking ahead, the next few months may test the resolve of the local housing market as we will see whether continuing low borrowing costs and lack of housing supply coming onto the market outweigh the uncertainties over Brexit and local political concerns. Despite these uncertainties, the economic fundamentals remain relatively firm for house buyers with housing affordable, high employment and historically low mortgage rates.”

Tony Steed, the Housing Executive’s Acting Head of Research, commented: “Although the housing market slowed a little in the final quarter of 2016, the overall average price during the year was higher than in 2015, continuing the recent trend of gradual, and more sustainable, house price growth.  However, with political and economic uncertainty, and the likelihood of increased pressure on households’ disposable incomes, 2017 may bring its own challenges for the local housing market.”

The full report can be viewed at ulster.ac.uk/housing-market-reports.