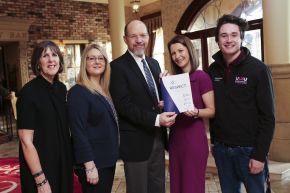 Ulster University has officially launched the RESPECT Network, a collaboration of students, academics and third sector organisations across the island of Ireland that aims to promote safer relationships for all.

Ulster University is a founding partner of the RESPECT Network, which was established as a result of growing evidence relating to issues associated with healthy relationship behaviours and attitudes, and the support available to individuals across the island of Ireland. The research will drive the development of policies and procedures supporting individuals and families dealing with a wide range of issues associated with dating, intimate behaviours, drug and alcohol consumption, consent and other relevant concerns.

One of the very first research priorities of the RESPECT Network is the promotion of safer relationships within higher education. Ulster University hosted the inaugural conference at which delegates heard from keynote speaker Professor Janet Beer, Vice-Chancellor of the University of Liverpool. The newly announced incoming president of Universities UK, Professor Beer, spoke about best practice approaches for engaging senior teams in tackling violence against women, harassment and hate crime affecting students.

Other keynote speakers included Professor Bill Flack, Bucknell University, Pennsylvania, who presented on the USA developments of sexual assault within universities and how local higher level education institutions can learn from the research.

Members of the network include Ulster University, NEXUS, Rape Crisis Centre Ireland and the National Office for the Prevention of Domestic, Sexual and Gender-based Violence in the Irish Department of Justice and Equality. RESPECT researchers have expertise in everything from intimate partner violence and family law to childhood maltreatment and police response to domestic violence.