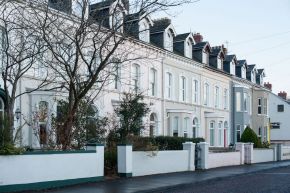 New Ulster University research into Northern Ireland’s housing market has indicated an annual increase in house prices, however points to evidence of short-term volatility in the market, which could reflect uncertainties following the Brexit vote.

The University research recorded an annual increase in the average house price by 6.1 per cent to £159,932, however reveals a less optimistic picture over the quarter with an increase of just 0.1 per cent. It suggests that in the immediate aftermath of the Brexit vote, both potential sellers’ and buyers’ concerns may have been heightened, contributing to a slowdown in house price growth.

Lead researcher, Professor Stanley McGreal from Ulster University said: “Ulster University’s house price report offers an in-depth analysis of the local housing market, providing a vital tool for both buyers and sellers. It is supported by estate agents across the region who echo the findings in the report. They indicate that third quarter performance was not significantly different from the second quarter, in comparison to previous quarters that saw much higher rates of growth.

“However, many agents suggested that the anticipated shockwave of the referendum might have been exaggerated in the short term. Interestingly, some agents expressed the opinion that the departure from the European Union had not actually taken place yet and that the continual annual growth may not last as we near the exit deadline in the two years following the trigger of Article 50.

“Overall the report sets out an upward movement in the market, with a slight slowdown of price growth over the quarter. However, it is important to note that this is simply a decrease in the growth rate and not reflected as a decrease in the average house price for Northern Ireland.”

Despite new legislation introduced in April 2016, which increased stamp duty by three per cent for those buying a second property, the research records a rise in residential property sales over the quarter to 2,013. The report also highlights a major shift in the market share taken by newly built property at 20 per cent, suggesting further strengthening of private sector housing development.

Joe Frey, the Housing Executive's Head of Research, commented: “Quarterly and annual rates of house price change may vary substantially when viewed in isolation, but overall the period since early 2014 has been characterised by relative stability in Northern Ireland’s housing market.  The uncertainty that will arise over the next few years as a result of Brexit will undoubtedly impact on the market, but it is much too early to estimate the size of this impact.”

Michael Boyd, Progressive Deputy Chief Executive and Finance Director added: “The volume of housing transactions remained high in the third quarter of the year, with a 2 per cent increase from the previous quarter. This increase, albeit slight, indicates a level of buoyancy in the local housing market over the three months to September.

“With the Brexit referendum vote behind us, the uncertainties of its immediate aftermath have not had the impact on the volume of housing transactions or the sales prices achieved, that some had predicted. The economic fundamentals remain strong for house buyers, with affordable housing, high employment and low mortgage rates.”

The full report can be viewed at ulster.ac.uk/housing-market-reports