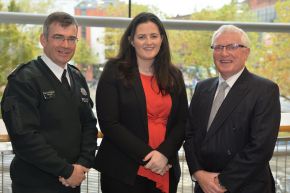 Ulster University academics examined the rapid transformation of policing in Northern Ireland, and looked ahead to the challenging journey that still remains, during an event at its Belfast campus marking the fifteenth anniversary of the establishment of the Police Service of Northern Ireland.

Ulster University’s Dr Jonny Byrne who organised the conference as part of a series of Social Sciences events being delivered by the University said: “In the last 15 years, policing in Northern Ireland has been transformed. In a challenging environment, the PSNI has grown to become one of the most successful police services in Europe.

“As a young police service in a post-conflict society, a long journey lies ahead. Today’s event has enabled key stakeholders, including Ulster University academics who have been involved in an independent research capacity since the PSNI was established, to share thoughts and concerns in a meaningful way.”

In her address to delegates, Justice Minister Claire Sugden reflected on the 15 years since the establishment of the PSNI and the creation of the Policing Board and the journey that had brought Northern Ireland to a very positive place.

She said: “The police, coronial service, police ombudsman, courts and other agencies must be supported as they address the many challenges facing the justice system in Northern Ireland. My overall aim is to build a society where everyone has confidence in a strong and efficient justice system. My approach is to adopt a ‘problem-solving’ justice model which will drive the reforms I am working to put in place over the next five years.”

PSNI Deputy Chief Constable Drew Harris said: “The agenda for today’s conference is not just about reflecting back – it is about moving forward.

“The journey that we have been on and the progress that we have made over the last fifteen years should give us real confidence for the future. Despite the enormous challenges we face, we should be optimistic about what can be achieved when police, partners and the community work together.”

Chair of the Northern Ireland Policing Board Anne Connolly said: “Fifteen years on policing remains a key part of the fabric of our society and continues to progress and evolve.  Within the now established policing architecture we have a model of accountability that has stood the test of time and provides an oversight framework that remains essential for confidence building in the community.

“Whilst we must protect the fundamentals of our policing reforms into the future, we must also adapt to the ever-changing policing landscape. There are factors that focus our minds now that we hadn’t even comprehended 15 years ago or thought would shape or impact our society.  Changing crime, changing policing demands, changing technology and most importantly changing budgets.

“There are also new opportunities to work more collaboratively but we must also make sure that policing is properly resourced to meet the demands now being faced so that our community is safe and protected from harm.”