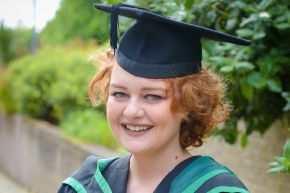 Medical miracle Megan Boyd will graduate with a degree from Ulster University today after overcoming a life threatening illness.

Medical miracle Megan Boyd will graduate with a degree from Ulster University after overcoming a life threatening illness.

The remarkable woman from Cookstown was diagnosed with Acute Lymphoblastic Leukemia two years ago and was told by doctors that they did not expect her to survive but she refused to give up and pulled through to amaze the medical profession.

In the process brave Megan has gained a BSc 2:1 (Hons) Social Policy and Criminology degree after completing a three year course at Ulster University. Such was the determination of the 23 year-old that she did her exams from her hospital bed in order to fulfil her ambition of finishing a degree that she was passionate about. Megan's story is one of fighting against the odds to achieve her goal.

Thankful for much assistance from Ulster University, Megan and her family will feel immensely proud when she graduates.

Acute Lymphoblastic Leukaemia is a fast growing cancer that crowds out bone marrow, preventing it from making the normal red blood cells, white blood cells and platelets that your body needs. Megan's life changed forever in 2014 when she was diagnosed with the serious condition which led to her having a bone marrow transplant and taking a new trial drug in a bid to prolong her life.

"I felt like I was getting a cold. I had sore muscles and flu like symptoms and was really tired to a point I was so exhausted I couldn't get upstairs to bed and I told my mum I thought I was dying," recalls Megan, when telling her story.

"The next morning mum made an emergency appointment with my GP for 10am . Mum and I fell out because I didn't want to get out of bed I felt so sick. My GP thought I had viral meningitis and sent me straight to Craigavon Area Hospital for blood tests.

"When I got to Craigavon Dr Boyd told me it wasn't good. I had serious blood cancer and they said it was unlikely I would make it through the next 48 hours. I was blue lighted to Belfast City Hospital. They told me to phone mum and dad and my friend who was with me came with me in the ambulance.

"I had Acute Lymphoblastic Leukemia and didn't think I'd survive. They gave me a lot of steroids. I went into remission after the first cycle of chemo which they said wouldn't work for me. The cycle was for five weeks. I was five months in Belfast City Hospital in isolation. Mum gave up work when I relapsed.

"Professor McMullan in Belfast City Hospital said I wasn't going to survive without a bone transplant. On 1st January 2015 I went for my bone marrow transplant but was told that day my cancer was back, I had relapsed and that chemo wouldn't work because the last session was so aggressive I was now immune to it.

"The bone marrow transplant was through a Hickman line in my shoulder. My whole immune system had to be killed off first. I got graft versus host disease which kills most people with a transplant, but I survived. They had to kill it through a dose of steroids.

"My consultant Professor McMullan sent me to the Royal Free Hospital London for a new trial drug. I was there for 10 weeks and had two cycles of the new drugs and steroids in between. I went back into remission. The guy next to me in the hospital died from the trial drug, it didn't work for him.

"I came back home but and went straight to St James's Hospital in Dublin to have the bone marrow transplant before I relapsed again. They already had the donor waiting from January.

"I was given the bone marrow at night. Before that I had six days total body irradiation (tbi) to wipe out my own bone marrow cells, then three days of chemo after that and a day for the bone marrow. When your blood counts are down you can have the cells. It's like a bag of blood. You can see all the cells jumping around.

"After hospital in Dublin I lived in a hotel in Dublin with mum for two months. I had to have blood check ups three times per week, then up and down to Dublin for another two months on Tuesdays and Thursdays to have my bloods checked.

"The doctors said I was a medical miracle and that I shouldn't be here. The thing is, I could relapse at any time."

Megan paid tribute to the hospital staff and Ulster University for their help through the ordeal.

"The staff in the hospital were amazing and my Ulster University course director, Dr Wendy Saunderson, came to my hospital bedside in Belfast to invigilate my exams. I had finished my three years study with just my dissertation to finish and 2 exams to do. I did my exams with Wendy at my bedside. She was so helpful and really went out of her way. She got it all sorted for me and came and sat with me."

The amazing Megan is now back studying a three year social work BSc degree at Ulster University.  She wants to be a social worker and is intent on raising awareness of her illness, the Anthony Nolan Bone Marrow Register and to encourage people to sign up for the donor register to give more people the change of finding a match.

"My donor was from Germany," says Megan, who this summer with go on holiday with friends to Sunny Beach in Bulgaria.

"He said he became a donor because a baby in his village needed a bone marrow donor and it worked. After my operation I craved salmon for weeks. I had it for breakfast, lunch and dinner. I wrote to my donor and one of things I asked him was if he like salmon. He said he didn't like it, he loved it and he hoped I didn't pick up everything he liked such as German beer!"