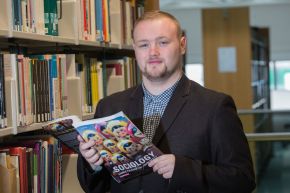 Derek Hanrahan from Omagh has overcome the challenges of living with autism to graduate from Ulster University with a first class honours in sociology and psychology and hopes to inspire others facing similar obstacles to pursue a university degree.

"It was only at the age of 14 that I was diagnosed with autism. From a very early age I found education to be a very difficult experience, not academically I just struggled to fit in. My lack of understanding the basic rules and social conventions led me to being placed in a special needs school. Running parallel to this was the breakdown of my family environment, which ultimately led me to being placed in care. It was a very traumatic time for me.

"I chose to use these experiences as a driving force and as soon as I was old enough I enrolled at my local college. It was my goal to attend Ulster University and I worked extremely hard to achieve the qualifications I needed to get in. I thoroughly researched the University and quickly decided it would be my first choice thanks to its quality of teaching and the support it offers to young people who have not come through mainstream education. I found the process of applying and being accepted a hugely rewarding experience."

Derek was awarded a Gateway Scholarship from Ulster University, which is aimed at supporting students from disadvantaged backgrounds to pursue a university education.

"I wanted to study sociology and psychology to enhance my understanding of a world that I felt so out of sync with. The scholarship allowed me to really focus on my studies – I could get books when I needed and not have to wait or worry about the extra cost. It also helped with my travel costs from Omagh, which meant I could be on campus more and benefit from being in the university environment. It was truly instrumental in supporting my education.

"Over the years I wanted to help inspire others growing up in disadvantaged circumstances and became involved in numerous charities including NSPCC, Action for Children and importantly Sixteen Plus who had helped me when I was younger.

"The process that I have been through has not been an easy one. It would have been easy to just withdraw from society but thanks to certain individuals, my confidence grew and I started to realise my potential. I took this belief and a strong work ethic and endeavoured to reach my goal of third level education.

"In the future I intend to continue my higher level education to PhD level whilst at the same time becoming involved in my community as an advocate for those diagnosed as being on the Autistic spectrum. I want to empower those most in need and I realised that pursuing a university degree would be the best way for me to prepare for a career in this field. I want to show others that a person on the spectrum cannot not only succeed but also help others to succeed."