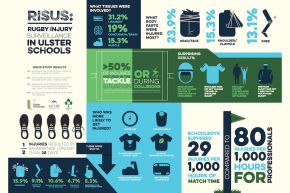 The three year research project, which aims to make the game safer and better inform future rule changes, is the largest prospective study of schoolboy rugby injuries to date. It was carried out in 28 grammar schools across Northern Ireland, involving 825 players on 1st XV rugby squads with an average age of 16.9 years.

The research, which has been published in the British Journal of Sports Medicine, is being delivered by Ulster University and the RISUS group, a consortium of experts from the medical and conditioning professions. It is funded by the MITRE trust, the Irish Rugby Football Union (IRFU) and Ulster Rugby.

The first set of data collected over the 2014/15 season recorded 426 injuries of which 204 resulted in an absence from the sport for longer than 28 days, primarily due to fractures or sprains. The three most common injury sites included the head/face, shoulder and knee.

Ligament damage accounted for 31.2 per cent of injuries followed by 19 per cent for concussion and 15.3 per cent for muscle damage. In addition, protective head guards or shoulder pads were not found to offer any additional protection from injuries to those areas.

Ulster University's research highlights that players were compliant with current graduated return to play regulations following concussion and suggests the prevalence of incidents could relate to better awareness and recognition of the brain injury.

The research points to a trend of increased injuries in older, heavier players who regularly undertake weight training. The research group is carrying out further investigation into the relationship between player profile and injury associated with game exposure and playing load.

Lead researcher, Dr Chris Bleakley from Ulster University said: "We discovered that over 50 per cent of injuries occurred in the tackle situation or during collisions, however the lighter players were less likely to sustain injuries. Larger players are used more during games and with their higher injury risk correlating to a higher volume of collisions, we recommend that this subgroup have their match load and training modified to lessen injury risk.

"Interestingly, we found mixed patterns on the effect of protective equipment in rugby. Approximately a third of players reported regular use of shoulder pads or head guards but there is no evidence that these had any influence on injury risk. It indicates that wearing shoulder pads did not implicate risk of shoulder injury and that head guards did not reduce concussion risk.

"The results of this study will allow us to develop recommendations for future preventative strategies such as tackling techniques and training, ultimately minimising risk to rugby players at school level. The aim is to make the game as safe as possible while still maintaining the spirit of this hugely popular sport."

Ulster Rugby Medical Director, Mike Webb, added: "The research shows that one out of five injuries sustained to schoolboy rugby players in Northern Ireland were injuries to the head, many of which were concussion.  This concussion rate is higher than that reported in previous surveys of schoolboy rugby in England. However, this could be attributed to the drive in recent years by Ulster Rugby and IRFU to better educate players, coaches, referees and parents on the identification and management of this injury.

"The research showed that players displayed a very high adherence to the recommended IRFU return to play guidelines following a concussion which is extremely encouraging. There would appear to be a change in attitude when it comes to concussion both at professional and grassroots level of the sport, those involved in the game are less likely to take the risk of playing on after a potential incident. "

Mr Pooler Archbold, an orthopaedic surgeon and principal investigator to the study continued: "Whilst tackling is an integral part of full contact sport this is where targeted efforts could significantly reduce injury rates. With the trend of head/upper body injuries, it is critical that schoolboy referees protect players by consistently penalising collisions and tackles above the line of the shoulder. It is vital that young players learn proper tackling techniques."