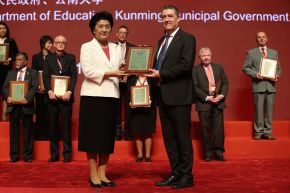 Competing against over 500 Confucius Institutes in 140 countries, Ulster University has won the Confucius Institute of the Year award, an international accolade that recognises the University’s commitment to furthering the teaching of Chinese language and culture in primary and secondary schools in Northern Ireland.

Opened in 2012, Ulster University’s Confucius Institute aims to develop academic, cultural, economic and social ties with China. It supports the teaching of Chinese in over 100 schools across Northern Ireland, as well as the education of Chinese culture through community liaison initiatives and events.

The accolade was awarded by Hanban, a public institution affiliated with the Chinese Ministry of Education.

Professor Montgomery said: "This international accolade is an extremely positive endorsement of Ulster University's Confucius institute and a much deserved acknowledgment of our talented, committed staff to supporting exceptional growth in the number of Chinese language learners in Northern Ireland, which has risen from 101 in 2012 to over 18,000 in October 2016.

"Ulster University’s Confucius Institute plays a key role in supporting our vision to build a globally engaged and globally relevant University. It offers valuable opportunities for increased cooperation between the