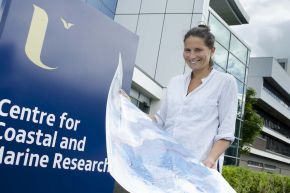 A hidden celebrity getaway and movie filming location in the Mediterranean, which attracts stars such as Madonna, Isabella Rossellini and Georgio Armani, is now the focus of a new ground-breaking piece of research by Ulster University.

Known as the black pearl of the Mediterranean, the paradise Italian island of Pantelleria located between Sicily and Tunisa is actually the top of a large active volcano that last erupted in 1891.

Global marine geoscientist Dr Sara Benetti from Ulster University will lead an international scientific team on a week-long expedition to explore the impacts of the island's volcanic eruptions on underwater or submarine environments.

The results will help to uncover unanswered questions about the evolution of the volcanic island over time and help better understand the impact its explosive eruptions have had on the surrounding seafloor where important ice-age coral communities are most at risk.

Using multi-beam technology alongside samples and images of the seafloor collected with the Italian research vessel Minerva Uno, the expedition brings together a team of scientists from across the UK, Ireland, Italy, Spain and the Netherlands.

Funded by the EU Research Infrastructure Eurofleets2 project, the team will depart from Messina, Sicily on the 6 August 2016.

Dr Benetti explains: "What lies beneath Pantelleria's waves is a treasury of preserved clues into the island's eruptive history that can help reconstruct submarine geohazards and their impact on underwater biodiversity.

"Very little is known about the underwater portions of Pantelleria. The study will focus on its north-west coast where the most recent volcanic eruption occurred in 1891 and deposited most of its material below sea level.

"The volcano is located in the Sicily Channel, an important pathway of mass water exchange between eastern and western Mediterranean. By examining the sediments around the island we will unveil how the volcano's well known high-energy explosive eruptions have spread volcanic material across a good portion of the Mediterranean over time and also the impact that has had on the important glacial-age cold water coral communities that lie beneath."