13 inspirational individuals will be awarded honorary degrees by Ulster University this summer. 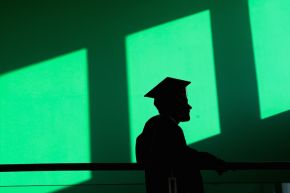 13 inspirational individuals will be awarded honorary degrees by Ulster University this summer.

As Game of Thrones fans around the world await the season six release of the hugely successful HBO fantasy drama series on Monday 25 April, Ulster University is to recognise the contribution made by two of its co-creators, David Benioff and Daniel B. Weiss.

The renowned American screenwriters and producers are just two of 13 inspirational individuals who will be awarded honorary degrees by Ulster University this year.

Receiving honours in recognition of their services to the community are civil rights campaigner Ivan Cooper; Auxiliary Bishop of Down and Connor, Dr Anthony Farquhar; Claire Keatinge, the Commissioner for Older People; CEO of the WAVE Trauma Centre, Sandra Peake; Sister Mary Turley of the Flax Trust and, environmental conservationist, maritime historian and kayaker Robin Ruddock.

Commenting on the recipients, Ulster University Vice-Chancellor, Professor Paddy Nixon said: "Thousands of students graduate from Ulster University each year; young people and mature students, all looking to the future and ready to make a positive impact across society.

"As we recognise their individual achievements, it is vital that they have real life, relevant examples of people who have excelled, who inspire, and who truly make a difference to the world around them.

"From Daniel Weiss and David Benioff who have placed Northern Ireland's creative industries capability on the global stage, to the pioneering efforts of Ulster alumna, Betty Hutchon, who has enhanced the lives of incalculable numbers of newborn and preterm infants, each of our honorary graduates has a special relevance and connection to the aspirations of today's students.

"Our honorary degree recipients not only represent the diversity of the sectors in which our graduates are employed, they represent the determination, confidence, talent and creativity which we know our students can and will emulate as they progress in their chosen careers."