Ulster University's Professor John Callan led the team of researchers who made the pancreatic cancer breakthrough. 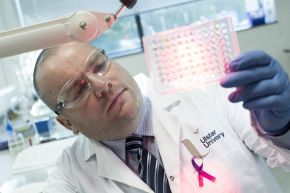 Ulster University's Professor John Callan led the team of researchers who made the pancreatic cancer breakthrough.

Scientists at Ulster University have made a major breakthrough in the global fight against pancreatic cancer, the fourth most common cause of cancer-related deaths globally.

The work, led by researchers at Ulster University, has revealed the potential of a new, minimally invasive treatment, activated by harmless sound waves, also known as ultrasound.

Initial tests on the most common type of pancreatic tumour called Pancreatic Ductal Adenocarcinoma (PDAC), undertaken at Ulster University's Biomedical Sciences Research Institute in Coleraine, have shown a five-fold reduction in tumour size, making it potentially one of the most significant breakthroughs in the treatment of pancreatic cancer in recent years.

Of the top 21 most common types of cancer in the UK, pancreatic has the lowest survival rate - with just 4 percent of patients surviving five years or more – a figure which hasn't changed in more than 40 years – and more than 200,000 people around the world die from pancreatic cancer annually.

In developing this technology, Ulster University Professors John Callan and Tony McHale have teamed up with University of Oxford's Professor Eleanor Stride and one of Northern Ireland's top pancreatic cancer surgeons, Mr Mark Taylor, to produce the minimally invasive treatment that has the potential to significantly improve the outcome for pancreatic cancer patients.

Ulster University's Norbrook Chair of Pharmaceutical Science, Professor John Callan, explains: "In what is a highly novel and targeted technique, our team has developed tiny oxygen filled microbubbles which have a non-active drug attached to the surface.

"After the microbubbles have been delivered by injection, they are purposely burst in the tumour using harmless sound waves, releasing the oxygen and non-active drug. These sound waves also activate the drug, a treatment known as sonodynamic therapy (SDT), making it kill the tumour cells.

"Because we can control exactly where the sound waves go, we can selectively target the tumour and spare healthy tissue making this a highly targeted therapy with reduced side-effects.  This really is a groundbreaking development and one of the most promising advances in pancreatic cancer research for decades."

In addition to the targeted delivery and treatment potential offered by the approach, the delivery of oxygen directly to cancer cells also has the potential to increase the effectiveness of existing treatments for a range of cancer types.

Professor Callan adds: "Conventional cancer treatments such as radiotherapy and certain chemotherapies are often limited by poor oxygen supply, which is a characteristic of most solid tumours given their unique blood vessel structure. "When our microbubbles burst, they provide a temporary boost in the amount of oxygen available in the tumour, enhancing the effectiveness of techniques that require oxygen to work."

Top pancreatic cancer surgeon Mark Taylor, who has been working closely with the Ulster University and Oxford academics on this work, is excited by the potential offered by this new treatment.

Mr Taylor adds: "Pancreatic cancer patients typically present at an advanced stage because the disease tends to have few symptoms until it is well established. By the time patients seek medical advice the tumour tends to be large and well established in the abdomen, making surgical intervention and other treatments largely unsuccessful.

"This therapy has the potential to reduce pancreatic tumours to a size which would make surgery an option for a greater number of patients, as well as increasing palliative care options at the very advanced stage. It is a very positive step forward in treating one of the most challenging forms of the disease.

"We are currently working with the research team at Ulster University to identify the best possible way to move this technology to the clinic in as timely a manner as is possible".

"We are excited to hear about this interesting research, which could lead to a breakthrough in treatments for pancreatic cancer, and potentially longer lives for thousands of people across the UK. While it will be some time before this research reaches the clinic, we welcome any research like this, because there are so few treatment options for pancreatic cancer and the disease has the lowest survival rate of all the 21 common cancers. Just five per cent of people in Northern Ireland survive for five years or more after diagnosis.