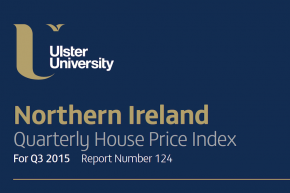 The University research, which is carried out in partnership with the Northern Ireland Housing Executive, presents a snapshot of the performance of the residential property market in Northern Ireland between July and September 2015.

The share of newly built property remained at 18 per cent in line with the second quarter of 2015, again signalling a steady recovery in private sector housing development. At a regional level the strengthened housing market was reflected in most areas either through increased average price or growth in sales volumes.

Lead researcher, Professor Stanley McGreal from Ulster University said: "Ulster University's Quarterly House Price Index is an independent survey designed to inform those at any stage of the house buying or selling process in Northern Ireland.

"The most recent research highlights a degree of buoyancy in the market compared to more cautious conditions experienced during the second quarter of 2015. It shows an increase in both average house prices and volume of sales and with this in mind, it appears that Northern Ireland is following the growth in mortgage approvals that is being recorded in the rest of the UK."

Ulster University also collaborates with the Northern Ireland Housing Executive to produce bi-annual research reports on the performance of the private rental market in Northern Ireland. The latest report, which covers the period between January and June 2015, indicates that the private rented sector is also continuing to grow.

Joe Frey, the Housing Executive's Head of Research, said: "The latest House Price Index survey and the research report on the Performance of the Private Rental Market in Northern Ireland indicate signs of continued recovery.  The latest analysis of the performance of Northern Ireland's rental market would confirm the longer term prognosis that the private rented sector will continue to grow as house prices rise and first time buyers find it more difficult to enter the owner occupied sector.

"In addition growing pressure on public resources as a result of ongoing austerity means that waiting lists for social housing will continue to remain high and that Government will increasingly turn to the private rented sector for help in meeting the needs of lower income families. The prospects for continuing buoyancy in the private rental market are therefore bright."